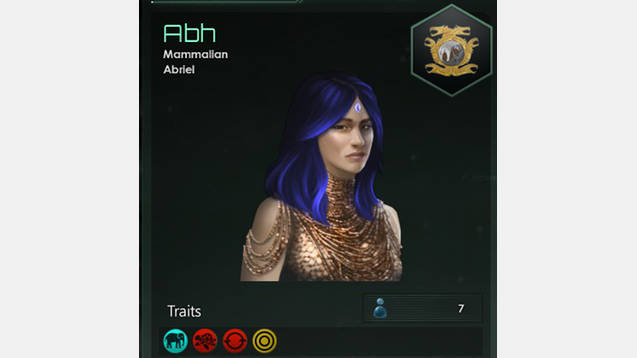 In the original series Abh are blue-haired long-living space-dwelling genetically altered humans. I just had to try adding this species to the game despite my next to nothing skill in modding.
Mod is progressing along with my skill in modding and with my understanding of the whole system here. And when I have time to do all of it. My first rule is to not add something too time-consuming unless I’m sure it’ll work right and is in synth with original. For example, I’m not even trying to add Abriel ears, because giving them to every leader is as wrong as limiting Abriels to leaders only. Therefore, I won’t try it until I discover a way to make it right.

For now, there’s a custom “Humankind Empire of Abh” nation with Abh species.
Those are the characteristics of HEoA and its people:
– Its own government type, which is for now not that different from Despotic Empire except for its bonuses.
– Proper crest from the series.
– Blue hair and Frosh (third eye thingy) of Abh. (though I’ll be very grateful if someone tells me why hair are disappearing sometimes, I’m out of ideas already)
– Collectivist, Militarist and Materialist ethos. For reasons.
– Venerable, Slow Breeders, Charismatic and Non-adaptive. For the same reasons.
– A proper legended (as closely to the original as it’s possible) custom star system with altered ringworld (nicknamed “Abh Capital”) and eight Sords (which are there for solely esthetical purposes though)
– Abh just do not live on planets. Therefore, their compability with everything except of their own custom man-made world is minimal. Also their world is not suited for other species.
– Fungoid ships and Arthropoid cities. (the closest approximation I could get)
– No names for planets – Abh just don’t care, planets are called cumerically according to the star names.
– Last names are authentetic, so are the names of the rulers. The rest is just randomly generated.

A combination of these factors leads to quite unortodox strategy: it’s very difficult to colonize other star systems. If it’s done at all, it should be done using androids or subjicated species. To truly colonize new planets aside from your big, but resourceless (purposely) homeworld (even if it has some excessive number of science facilities), you should make other species your subjects – and loyal ones at that. So you should be quite creative playing this particular mod. That’s the whole point. ????
I’m yet not finised with my own test run, so I’ll be very grateful for feedback, especially on possible glitches and bugs. I’ve managed to catch most of those that were in the previous version, but yet not quite sure…

I’d really like to do more. For example, diadems – Alphas – and proper uniforms are the first thing that comes to mind. For that, I’ll need a help of someone who’s better with drawing though.
For now, I’m quite finished with things that could be done halfheartedly. Next in my queue are attempts to add some minor events and effects to get an experience with whole event mechanics. If I’m successful with it, there starts some really interesting things…