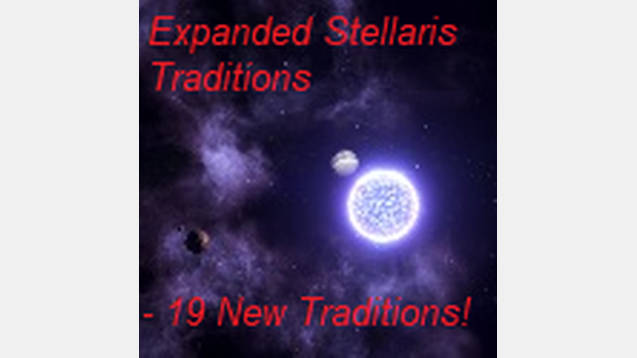 I have tried to mix more standard modifier (like Government Ethics Attraction) with more interesting stuff like bonuses under certain conditions (being at war, planets with high species diversity, not having diplomatic relations etc.) or other stuff (bonus unity from destroying enemy ships and stations, adding new traits to leaders, unlocking new buildings…).

Mod Info
This mods adds 19 new traditions with a variety of new bonuses.

I have tested all tradition effects, read and re-read all the descriptions. It is quite a large mod so some errors might have appeared. However they should be quite minor (probably some effects not firing under some special cases I might have missed). Message me if you find something and I will fix it asap and if there is any errors they will hopefully be sorted out quite soon. There might also be some balance problems in the beginning. I think it is quite good. In most cases I tried to make things a bit weaker, rather than risking overpowered stuff (with some exceptions when I wanted some things to stand out. But I tried to balance with weaker traditions in the rest of the tree).

In some cases old traditions had a theme better suiting some of my new tradition categories. For example the Trans-Stellar Companies Tradition earlier were a part of the Prosperity Tree. When I added the Commerce Tree I figured TSC better fitted it and moved it over. In these cases I have replaced the traditions moved from the old trees with new ones (A Golden Age added to Prosperity). In a few cases, to prevent stacking of the same bonus several times, I have swapped out bonuses in the old trees (- Consumer Good Cost in Harmony was swapped for + Faction Influence). The number of instances of this is quite few (4 bonuses moved, 2 swapped for new bonuses, and one bonus partially modified, full list at the end of the tradition list). I have some ideas of re balancing the old traditions, but I wanted to wait and see depending on the reception.

Why More Traditions are Needed
I really liked it when Traditions were added to the game, I think they added some good opportunity to customize and role-play your empire. However the tradition selection were very limited in two senses:
– Few Traditions means a fewer number of traditions that fits your empires “lore”. I once made and isolationist race that mostly wanted to be left for them self, developing their land (as opposed to expanding). Their goes traditions Expansion, Domination, Diplomacy and Supremacy out of the window. That leaves with with 3 traditions that don’t contradict my theme (if I mentioned that they were highly religious then Discovery is not super ok either). Especially since you want all those Accession Perks you quite quickly have to adopt traditions that doesn’t really fit (and were 2/3 of the traditions doesn’t really improve your play style).
– Since there are so few traditions you will most likely adopt all of them (unless you play a short game). So whatever type of empire you play you will always converge to the same tradition set. Sad!
To make role playing (and playing in general) more fun I felt that the game dearly needed more traditions, so I added a few.
(I encourage the guys at Paradox to add more traditions. I guess it is one of a hundred of the things they have on their to-do list…)

Compatibility
Tradition mods are by default not compatible with each other. This have to do with how the UI is made. Each individual mod have to make their own UI file were they put the tradition trees in, and the game can only handle one of those files. There exists a few “merge” mods that combine a few tradition mods into a single mod (the merger manually makes a new UI file and put all the traditions trees from the various mods into it).
This mod No Longer modifies the 00_buildings.txt file (in an major way). It is Now Compatible with mods that modifies that file.
This mod still modify the 00_buildings.txt file, but this only to effect the build interface. If you delete that file/have a mod that uses it you will see the following effects:
– If you have the industry traditions you will see two versions of Mine/Mineral Silo. Just build the upgrades version.
-When you build temples/labs/etc. with the tradition that makes the produce additional resources the build interface won’t include the bonus (once built you will see it properly).
(Changes made to the buildings his mod affects might be overriden, but what I know this won’t have impact with the more popular mods, if you find something, tell me and I might make a patch)

Credits
Birdy (Maker of the Plentiful Tradition Mod, check it out: http://steamcommunity.com/sharedfiles/filedetails/?id=903007094 )
Quite a few thing in this mod is inspired by their work (but no code or images has been taken! Stealing is not ok!).
– Making a Malice Tradition Tree was his idea. I liked their idea very much and felt I couldn’t make a good Tradition mod without having that tree. Two of the bonuses are also the same as in his mod, but otherwise the traditions are quite different.
– Initially I called my Fait traditions Piety, but when I checked out their mod I felt that Faith sounded better and changed it.
– I saw how they “collapsed” the Discovery tree to make the layout more compact, and use that idea.
– They figured out how to make the scrollbar so you could fit more traditions in, I used that idea as well.
(There are a few cases were we have traditions with the same name. Except for Malice and Faith these are pure coincident.)
Stellaris Dev Team
– They came up with the Purity Tree (but for some reasons didn’t include it in the game, you can still find it in the game files though). I even used some text from them (since I’m making the mod for their game I figured this was ok. If they disagree I can change it ???? ).

Thanks
Birdy
– When making the mod, especially the interface, I looked at their mod and the vanilla implementation in tandem. By looking at the differences in implementation and result I managed to figure out how the UI was constructed.
– For being cool with me using some of their ideas.
The guys in the Stellaris Mod Discord Channel
Helped me with a few things.
The guys in the Stellaris Mod Forum
Also gave a few tips.