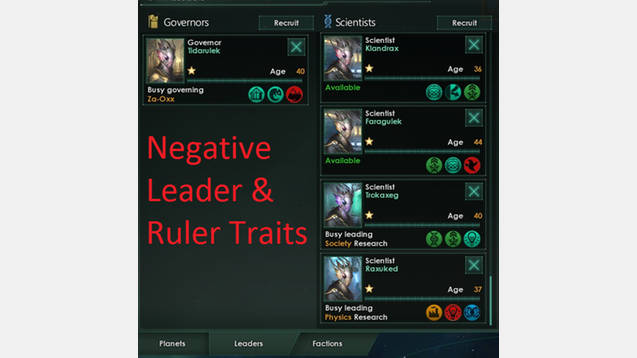 This mod adds a negative version of most leader traits and many ruler traits in the game. This is meant to be used together with my “More Leader Traits” mods, to add more flavor to your leaders. Also affects the AI.

Also allows scientists to have multiple specialities, and makes some of the original negative traits aviable form rank one.

Other version of this mod without ruler traits here.

It is completely random whether your leaders get positive or negative traits, so you might get really good or really terrible leaders depending on your luck. Expect to have some mediocre (or even terrible) leaders at the start of the game.

Should be compatible with all other mods.

Huge thanks to [Andon] for his contribution of balance improvements, updates and bugfixes. The mod would be in a sorry state were it not for him.

Now also translated to Spanish thanks to Kareliano!:D


Also check out one of my other simple mods:
-[4 Ethic Points] allows you to choose 4 Ethics for your faction instead of 3.

-[Faster Leader Pool Replacement] reduces the time for recruitable leaders to be refreshed from 10 to 3 years. I recommend using this mod together with “Negative Leader Traits”, as getting stuck with only bad leaders for 10 years might be devastating.

Sorry for the bad textures on the trait icons. I really suck at graphics:P Might come around to fix this later. (Been somewhat improved)