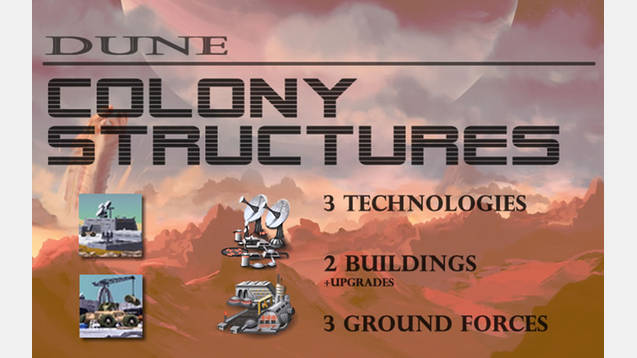 this one also aimes to expand the possibilities in building your colonies by keeping the vanilla experience as far as possible and to bring some content of one of the most famous scifi game and novel series – DUNE.

3 technologies, 2 building plus upgrades and three ground forces will be added to the game. The buildings and technology icons are scratchmade and heavily ispired by the game DUNE II.

Technologies
Planetary Radar Grid – society/new worlds
“With the colonization of new worlds the observation of the near unknown space becomes more important as we still don’t know what lies behind the distant stars.”
Prerequisition: New Worlds Protocol
Researchable after the first colony has been founded. Unlocks the Colony Outpost.

Although the militaristic governments have a slight advantage in researching the Vehicle Factories, the Missle Tank Division, a strong defensive unit, can only be trained by pacifistic empires. On the others side the Combat Tank Division is not available for them.

FUTURE PROJECTS
Bringing the Spice Melange to the game.