Warship Redux with Rangefinder For Stellaris 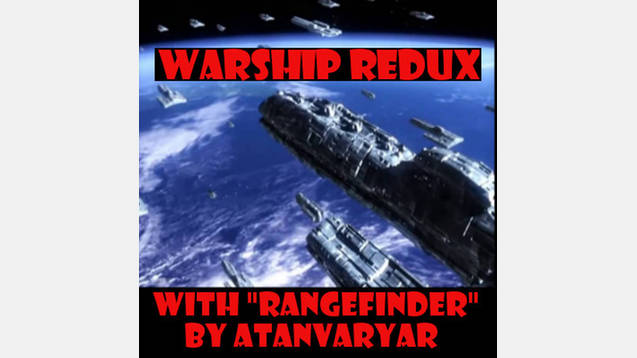 Warship Redux with Rangefinder For Stellaris

WARSHIP REDUX with Rangefinder is a major military vessel overhaul that adds 8 new ships and alters the construction system so that new ship classes are available at each spaceport level. Not save game compatible, you must start a new game for the mod to take effect.

This Version of Warship Redux also contains the “Rangefinder” mod by Atanvaryar with his kind permission. It is an excellent mod that adds a second combat computer which allows you to set a ship design to always maintain a certain distance from its target. I am releasing this as a separate mod because adding this functionality will corrupt save games started before it was installed. This mod will be updated alongside Warship Redux so you will lose nothing by switching over to it.

*8 New ships added: all carefully balanced so as not to be out of place with the vanilla ship types. All species types (including plantoids) are covered.

SCOUT: A small recon ship; very lightly armed but fast and cheap to make. Ideal for checking out nearby star systems for the presence of hostiles.

FRIGATE: The largest non-capital warship; essentially a stronger and heavier alternative to the destroyer.

ESCORT CARRIER: A light carrier vessel; used as a platform for multiple strike craft, the Escort Carrier is a smaller and cheaper alternative to the massive Fleet Carrier.

HEAVY CRUISER: Larger and more heavily armored than the standard Cruiser, the Heavy Cruiser neatly fills the gap between its smaller brother and the Battleship.

FLEET CARRIER: A massive vessel used as a platform for strike craft. Expensive and time consuming to build but tremendously powerful in combat.

DREADNAUGHT: A super-sized version of the Battleship; only the wealthiest and most powerful empires can afford to utilize these mighty weapons as their flagships.

SWACS: The Spaceborne Warning and Control Ship; this is essentially a corvette-sized electronic warfare vessel capable of mounting an Aura Effect item normally reserved for large capital ships. NOTE: Auto-generated ships do not mount aura items; you must manually add them in the ship designer.

FLEET TENDER: A larger cousin of the SWACS, Fleet Tenders may mount up to 2 Aura Effect items at once. With repair and capacitor aura effect items both installed the Fleet Tender can keep a strike force in the field almost indefinitely. NOTE: Auto-generated ships do not mount aura items; you must manually add them in the ship designer.

*New ships are available at each Spaceport level:

*Solar Panels and Orbital Hydroponic Farms now have 3 levels each, producing 3, 6, and 12 units respectively. Not really a warship upgrade but I wanted them in game so I added them here since I was adding spaceport modules.

*Removed the more obtrusive ship auras because they bothered me.

COMPATIBILITY: The files above had to be full replacements to allow for the changes to existing ships and ship yards so the mod will not work with others that also replace them. Generally, technology and ship mods that only add items will work fine with Warship Redux.

FUTURE PLANS: After the 1.2 patch comes out I will be adding new features to this mod regarding combat itself to include formations, variable engagement ranges, several visual tweaks, huge (spinal-mounted) weapons, and more.

SPECIAL THANKS: To Mirodo for figuring out the issue with the carrier’s picture not showing up in the ship designer. All hail Mirodo!