The Terosian Collective For Stellaris 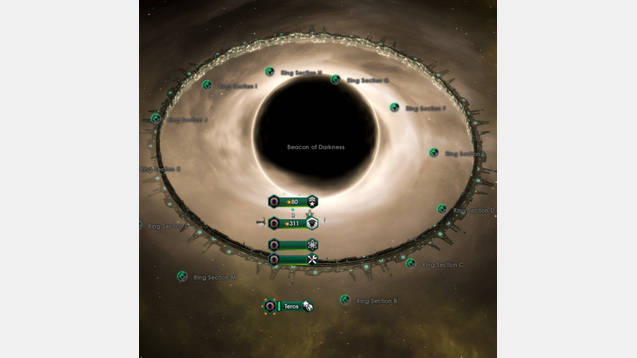 The Terosian Collective For Stellaris

Since the beginning, the only true constant has been darkness. The Accursed are no strangers to that truth. They are derived from it, even. The empire of Teros has long existed, but has never been quite matched with other galactic empires technologically. This, however, has recently changed.

Join the Accursed’s Terosian Empire as its new commander. Lead them as they spread their influence, and absorb all life, using the abilities of their newfound forms to advance their technology. There’s little to stop you, as you venture out from the Beacon of Darkness. Galactic assimilation is at your fingertips. (Note: Assimilation is not an exact process, and can cause some ‘interesting’ mutations.)

Don’t feel like leading the darkness? Then perhaps fight against it with your chosen empire, or even aid it as a foreign ally. The Terosian nations can spawn as normal AI empires if not selected, and are a bit more open to alliances and trades than other empires.

Three custom premade empires with custom personalities, and a new country type.
Custom start with a thirteen habitable section shadow ring world surrounding a black hole, intended to be exclusive to the Terosian Empire (within the scope of this mod).
Assimilation event to infuse non-shadows with the darkness.
Two additional shadow ring world systems, one with seam sections mixed in, the other with tech sections, intended for the Terosian Vanguard and Terosian Administration respectively.
Thirteen habitable section normal ring world, for those that aren’t a fan of the black and purple theme.
Optional advanced start with all ring sections colonized and partially populated. The same number of pops as your home section.
Optional advanced start for Terosian players. AI Terosians will get the advanced start automatically.
Color adjusted species portraits to fit the theme of the mod.
Four ethos points for ethics that fit the empires.
Custom name list.
Ring world auto repair at game start. (No more ring sections replaced by planets, and no more need for a preference trait for the fix.)
Unending trait for longevity. (Because since when do shadows die of old age?)
Shadow Ships
Shadow Cities
Ten additional non-designable Shadow Ships coded specifically for this mod, and geared around each of the collective’s empires.
A change of the base acceptance of -50 to 0 for diplomatic actions.
Ascendancy for those of you not quite ready to embrace the darkness. (Automatic Fallen Empire country type conversion if using provided Fallen Empire ship appearances.)
New war demand for those wanting to rid their galaxy of shadows
Five custom resource and/or research output buildings for Shadow Empires
Three custom government types for Shadow Empires
Custom awakening conditions for Fallen Empires
Fallen Empire city and ship appearances
That’s right. This mod can set you up as a real Fallen Empire (with a partial advantage to starting pop count, buildings, and fleets). Not just a normal empire with all techs calling itself a Fallen Empire. You’ll have the same ship designs, the same techs, the same graphical culture, the same tooltips, the same events, and all.


The mod gets some inspiration from:

Custom Race: The Pallid by Krabiel
Immortal Leaders Trait by Shadowlike
RingWorld by seed
And overwrites the following vanilla files:

Also, if you’re interested in chatting about anything and everything Terosian, feel free to join the Terosian Collection Modding Community on Curse. I would provide a link, but apparently Steam has been living under a rock and thinks Curse is a phishing site or something.