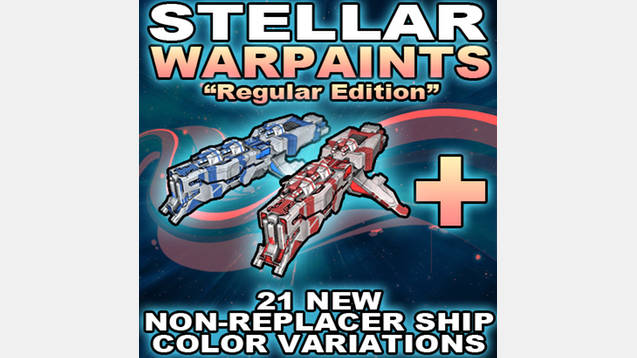 YOU ALSO NEED TO GET the Stellar Warpaints Part 2 – Runtime FIx for this mod, it won’t work properly without it (read below)

Because either the game or steam workshop can not handle big mods (500mb+) for Stellaris, and some have reported runtime errors/crashes when launching the game with this mod, i have split it into two files. You will need to get this mod, then immediately (this is of utmost importance) get the Part 2 – Runtime Fix from here:
https://steamcommunity.com/sharedfiles/filedetails/?id=702865711

If you do not get the “Part 2 – Runtime Fix” alot of the ships, especially reptilian will show up as mammalian/won’t be there!

After that, just enable both mods in the launcher!

The way that Paradox made the ship selection UI modable is that they made both the ship selection and city selection in one package. The sad bit is I only did new ships, but not the city selections that were automatically generated along with the new ships. For my current lack of understanding “City textures” and lack of time, I wanted to let all of you know; do not use the new cities, just use the vanilla ones. If anyone is willing to do a patch to this mod to add in the new cities, than by all means go ahead!

If you prefer more performance out of the game, you use my “Stellar Performance” mod and/or want the new ship textures to go along with that mod, or just have an older PC, you can get the “Performance Edition” version of this mod here:

!!! DO NOT USE both the Regular and Performance Edition versions of the mod as they are not compatible with each other. Make sure only one of them is active at any given time!!!

—FEATURES———————
This mod adds 21 new, standalone (non replacer) selectable paintjobs/paint variations for the vanilla ships (mostly focused on the Reptilian ships).
The new warpaints affect the subtle tint of the ship’s hull texture color (for better blending), the windows, ship lights (like hangars, engines, glow trails along the hull) and stripes (in the case of Reptilian ships).
The new warpaints are PLAYER ONLY, as in AI/randomly generated empires will not use them. This is intended for performance, to save up texture memory space in the VRAM and, of course, to make the player ships unique.
Custom Empires that you create, and set to use the new warpaints, will however use the new ship warpaints, if you flag them for spawning as AI in the empire selection screen (the Phoenix button next to the empire name).

This fix also includes further native support for downscaled versions of “More Ship Classes and More” mod ships. It also works with both the “Regular” and “Performance Edition” of the mod.
(Again, DO NOT USE both versions of the mod, they overwrite each other!)

—COMPATIBILITY———————
HEINLEIN 1.3.x
For the time being, it is incompatible with the “Epic Explosions fix for Downscaled Ships” mod, as in that mod’s modified explosions will not work on the new ships!

It is however fully compatible with the main “Epic Explosions” mod!

If you wonder why… it is because it took me 3 weeks to make this mod and add in the native and patch support for More Ship Classes and More and Downscaled Ships, during which I sacrificed my Stellaris playtime for it. And that fix also has alot of code that needs adapting and I don’t have the time for it at the moment. Now I wanna play! ????
Works with everything else. Any other mod is compatible.
Will work even when the game updates and tells you the mod is outdated (no guarantee for beta patches, but should still work with them)
If you use this mod to create a race with the custom ships and begin a new game, and then remove the mod, the save game may become unplayable/invisible ships/crash the game until you reactivate the mod.
Switching between “Regular” and “Performance Edition” versions of this mod works on savegames started with either one of the two mod variants.
I don’t ever mod beta patches due to the possible and usually present bugs these patches have, so please don’t ask for mod updates for beta patches. Unless beta patches change the file structure, all my mods should still work with them just fine.

–BUGS———————
None that i can think of, but if you encounter any, please post them in a comment, and I will fix them ASAP!