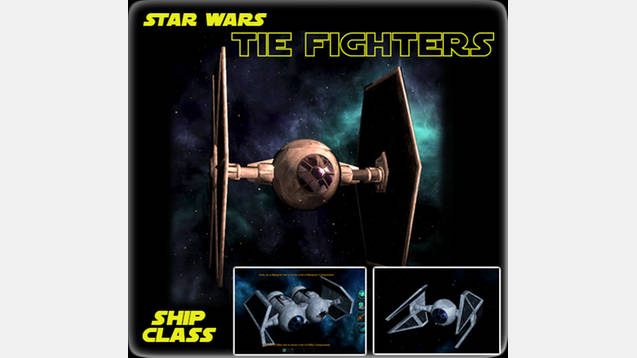 The new ship-class includes three sections you can choose to customize the Imperial Starfighter.

To create a TIE, just go to Ship Designer and Create New Design. It will be listed there.You can also build them in any loaded saved game with the mod activated.

All weapons are available to the TIE fighters, but in order to keep the large clunky turrets from crowding the ships exterior, they are NOT visible on the outside during the Ship Designer.

TIE/LN Frame: Standard TIE Fighter available. 2 small weapons, 3 Small Utilities, it has less hull armor and health than a standard corvette, but it has a low initial cost, and

has a much higher evasion than other ships. And it’s faster.

I’m new to modelling but I thought it’d be really cool to see some Imperial Fighters in the mix. I spent a lot of time on these badboys so please thumbs if you like it. I also tried to balance stats without making the TIE Sections overpowered.