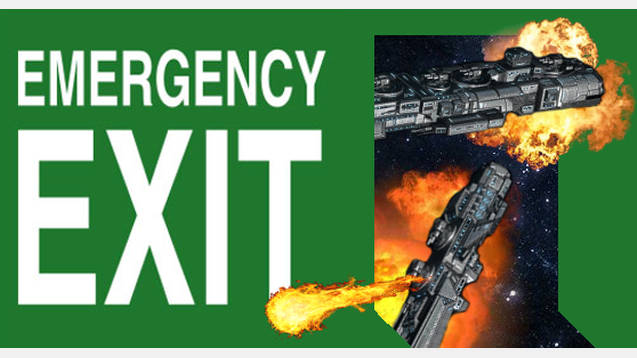 Purpose
This mod introduces a new balance mechanic: If you are fighting an empire that is significantly military superior, your ships get a chance to escape an engagement heavily damaged, instead of being destroyed.

Description
The mod determines which empire is the underdog according to galactic fleet power. The higher the power difference between the combatants, the higher is the chance that heavily damaged ships of the inferior party execute an automatic emergency jump before getting destroyed.

Wrecked ships reappear in a random friendly system. They are heavily damaged and in desperate need of substantial repairs before they can rejoin the fight. Should a recently escaped ship be destroyed again… well you get lucky only so often.

There are options available to also activate the escape mechanics for the superior party (via country edicts).

The Goal of this Mod
In MP it is currently next to impossible to recover from a significant fleet battle defeat. Your opponent will have crippled your empire long before you are able to recover. This mod reduces the recovery time and tries to give the underdog a better fighting chance.

This mod is part of a project that I split up into multiple parts, to give the choice to use only selected mechanics. I recommend to use this mod together with the other intended parts:
SGM Supply Lines
SGM Fleet Logistics
SGM Warscore

Compatibility
This mod does not overwrite any core game files and should be compatible with all other mods.

The limitations of the Stellaris scripting language however require that every ship size is handled seperately. Custom ship sizes are thus not supported by the escape mechanics, unless manually added to the code.

Known Issues
Escaped ships belonging to a federation fleet will change ownership back to the original owner. Unfortunately it’s not possible to resolve this issue, because there is no modding capability related to Federation fleets at the moment.
No matter their actual design, survivors will have one of the current ship designs (at the moment it is not possible to “copy” the actual design of a ship via modding).
If you do not use all of the supported mods, the error.log will contain entries concerning missing ship types and components. You can savely ignore that, the mod will work just fine.