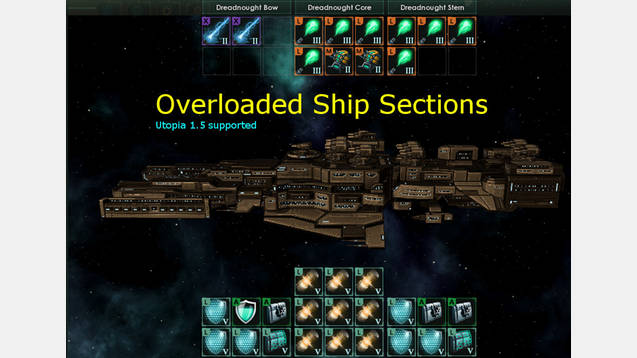 This mod is designed to provide some additional ship sections
using existing ship classes. Inspired by other excellent
ship mods on the workshop, but done within the existing ship
framework provided by the game designers.

2017-04-09:
Made a number of modifications with the goal of adjusting the
balance of the various ship types. In general, there are
slightly less augment slots and more room to equip standard
shields/armor/power etc.

Removed the Auxiliary Cruiser – it’s purpose was to utilize
special aura augments however scripting limitations were
unable to be overcome.

Removed the strike carrier in order to be able to consolidate
and re-balance the battleship sections. it would have been made
redundant.

The AI will use these sections depending on if it is aggressive
or defensive in nature – once it has done all of the required
research.

Fleet Carrier:
A carrier style ship capable of carrying a lot of fighters
into battle. Relies on a combination of weapons and fighters
to do damage.

Heavy Cruiser:
Heavier armament, but falls short of a battleship. Meant to
augment fleet strength as a ship of the line. Will be equipped
with weaponry geared toward larger ships.

Escort Cruiser:
Meant as a screen to guard capital ships to act as protection.
Will have weaponry meant to target ships its own size and smaller.

Advanced Heavy Destroyer:
Meant to go up against cruisers in numbers, they have medium and
small weapons. You have to choose to equip flak weapons if you
want PD capability.

Advanced Screen Destroyer:
This is meant to attack and engage destroyers and smaller.
Equipped with PD weapons also.

Advanced Torpedo Corvette:
Meant to attack capital ships with numbers, they are equipped with
torpedoes and small weapons.