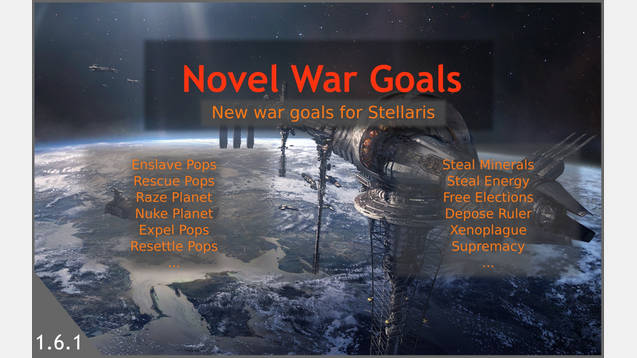 Novel War Goals – New war goals for Stellaris
This mod adds several new war goal types to Stellaris to give you (and the AI) more options for your offensive diplomacy. It is compatible with all other mods as it only adds new files. The AI tends to use these wargoals as well, although I am still ironing out some details there.

1) Enslave population
Up to ten populations from the target planet are enslaved and brought to designated planets in the attacking empire.

2) Rescue population
The reverse of Enslavement. Populations belonging to the attacking species or being mistreated can be rescued from an enemy planet.

3) Raze planet
All buildings on a planet will be ruined and some pops may die.
[Needs limited bombardment and is not allowed for pacifists.]

4) Nuke planet
The planet will be nuked from lower orbit and turned into a toxic tomb world. All pops that are not especially resilient will die.
[Needs full bombardment and militarist/xenophobe/hive ethics]

5) Force into sphere of influence
Forces the defeated into a sphere of influence for 25 years. This is a type of vassal and thus drops them from all alliances and federations and stops them from rejoining.
Technically they are now a subject of the attacker, allthough they do not join wars and can still do limited diplomacy and all those things.
The galactic ambitions technology is necessary to use this wargoal.

6) Steal Minerals
1000-5000 minerals of what is left of the defenders’ stockpile after the war are transferred to the attacker, the actual maximum amount depends on the game year.

7) Steal energy
1000-5000 energy credits of what is left of the defenders’ stockpile after the war are transferred to the attacker, the actual maximum amount depends on the game year.

8) Free elections
The ruler of the enemy country is deposed (= killed …) and the authority of the country is changed to “democratic”.

9) Depose Ruler
The ruler of the enemy country is killed and the authority of the country is changed to “dictatorial”.

10) Install Monarchy
The ruler of the enemy country is killed and the authority of the country is changed to “imperial”.

11) Expel Population
All inhabitants of a planet will be expelled, so that someone else might colonize it. Expel population does not care if they have a place to flee to and needs the purge policy for obvious reasons. Pops will try to flee to other planets in the same empire or other empires with the “refugees welcome” policy.

12) Resettle Population
Resettle population is the same war goal as expel population, but it will only resettle pops if it can find a planet in friendly (+allied) territory that can take these pops.

13) Stop the proliferation of sentience
This is the policy war goal counterpart to “Stop atrocities”. The losing country will change its policies forbid native enlightenment and purge presentient pops.
[Only for xenophobes]

13) Synth rights
This is the policy war goal counterpart to “Ban AI”. The losing country will change to give full rights to synths.
[Only for materialists]

14) Bombardment Conventions
The losing empire will change its bombardment policy to “light”.
[Only for pacifists]

15) Supremacy
This is a late-game wargoal for militarists. It can be used to annex an entire empire in one swoop. Using this wargoal is limited to a tier3 technology that has to be researched first.
Using it will also make “you” the end-game crisis from the point of view of the other empires.
[limited to militarist ethics]

16) The Xenoplague
This is a late-game wargoal for xenophobes. It can be used wipe out the population of a full empire. Using this wargoal is limited to a tier3 technology that has to be researched first.
Using it will also make “you” the end-game crisis from the point of view of the other empires.
[limited to xenophobic ethics]

– Something about technology and mega-structures probably ????