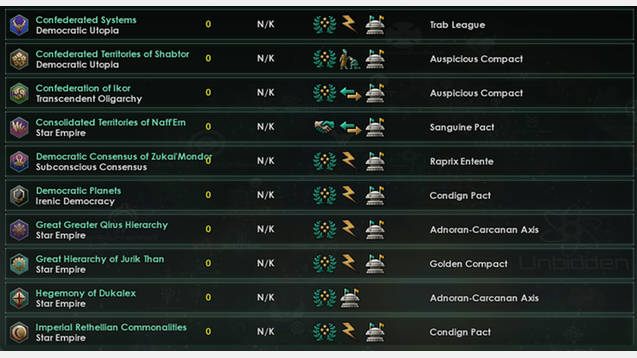 This a minimod aimed at fixing one of the smaller nuisances in Stellaris – the fact that seemingly every empire in the galaxy is named after the species that rules it. This is a fine old sci-fi cliche, but its silliness starts to become a lot more apparent when you run into the “Human Federation”.

This mod adjusts the available empire name formats, as well as their generation chances, resulting in a broader range of possible empire names, most of which will be named after their home planet. Some examples of names generated using this mod include:

The Assembly of Stars
The Xania Union
The United Nations of Earth
The Kingdom of Sejeth
The Kenjodan Dominion
The Sovereign Worlds
The Imperium of the Pure
The White Throne of Heaven
The Great Greater Qirus Hierarchy
(hey, nobody’s perfect)

Now compatible with Stellaris version 1.6.*. (and also 1.7.*, no matter what the launcher says)
Fixed a bug where empires could not spawn with the “Earth Empire” name format.
Fixed a bug where empires could spawn with “generic” names even though their government type was not specifically eligible for them.
At user request, made the mod compatible with Ethics & Government Rebuild. EGR’s custom government types are now incorporated into name generation, certain forms of government will receive appropriate names if they have the socialism civic, and theocracies with the Ecologist or Industrial ethics may now receive names reflecting that.