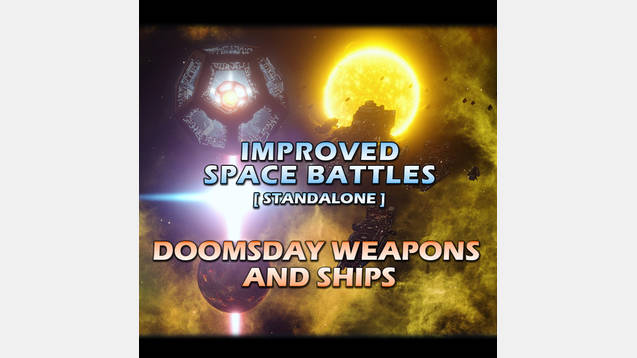 Improved Space Battles – expand your mid / late game with 5 new super-capital class ships, over 50 new technologies and 11 doomsday weapons – including planet destroying, star system destroying and anti-fleet super-weapons.
Compatible with Stellaris 1.6 and 1.7. Let me know if you find any bugs.
Improved Space Battles (ISB) attempts to improve both the visuals and gameplay of Stellaris’s space battles. This is the standalone balance portion of ISB and contains only the additional ship classes and doomsday weapons, without the gameplay changes. For the best experience, use this mod with Improved Space Battles [Graphics] which focuses on graphical tweaks for more epic space battles. This mod is designed for long games in huge (1000+) star galaxies. However you can lower the mod’s difficulty for smaller galaxies through Empire policies.

Looking for a challenge?
Try out ISB:Balance which includes massive buffs to FEs, AEs and Crises for an exciting mid – late game.

Ragnarok
Firing the Spear of Cassius

IMPORTANT – Fleet Power calculations halved. This change is intended to avoid value overflow issues making the AI do stupid things. The displayed FP of pretty much everything has been reduced to ~50% of what they were before, but their actual strength is unchanged
Features
Ragnarok
A massive super-capital class ship grown from the organic matter discovered near our galactic core. While we do not fully understand the ship or its technologies, we are able to exert some manner of control. It is able to deploy both the Spear of Longinus and Spear of Cassius doomsday weapons.
The Ragnarok starts out in an infantile stage. In order to grow its organic core to maturity, it has to consume 40 planets through use of the Spear of Longinus.
You may only own one Ragnarok at any time.
Designed as an anti-fleet doomsday deployment vessel.
The AI can use the Ragnarok and its doomsday weapon against you.
Erebus
A massive super-carrier that manufactures and launches fully-autonomous combat drones during battle.
The Erebus launches one drone squadron (10 drones) every 25 days during combat. The drone squadrons last for 90 days, after which they will automatically self-destruct.
Designed to destroy enemy fleet support vessels and expose their super-capital ships.
Avatar
A doomsday weapon built into a massive space station. Doom stars are here at last!
Extremely effective against other capital ships. However, it is very vulnerable to attacks by swarms of small vessels.
Can be used to deploy all available doomsday weapons, including the planet destroyer – Spear of Longinus.
Extremely expensive and time consuming to build. Requires completion of a special construction event chain.
Cannot be constructed from spaceport. Instead, build a constructor that will deploy an Avatar Construction frame that will start the construction project
Defend the construction frame from enemy attacks while it is under construction.
Only one Avatar may be owned at any time.
Sun Crusher
Doomsday weapon that comes attached to a ship.
Destroys star systems, nova’ing the star and turning glassing all planets. Also destroys all ships in the system.
Extremely slow. You have to get this ship into orbit around a star to activate it.
Other empires will hate you for building/using this. You can, however, use this against crisis invaders with no backlash.
Leviathan
Extremely fast and maneuverable super capital ship – it is almost as fast as a destroyer.
Only 6 large weapon slots. However, weapons receive a massive damage and attack speed boost. Does not provide any fleetwide auras
Titan
A massive super-capital ship that is able to deploy low – mid level doomsday weapons.
3 different cores allowing you to choose behaviour and ship characteristics. Either close ranged tank, mid ranged balanced, or long ranged damage dealer.
Once researched, unlocks various new fleet-wide auras.
Also unlocks doomsday weapons.
Doomsday Weapons
Deployed by either Titans or Avatars, these weapons of mass destruction allows you to annihilate enemy planets and populations at a cost. Full details regarding each doomsday weapon can be found in the change notes.
Evolutionary Virus
Neutronium Kinetic Bombardment
Nanite Disassemblers
Nanite Deconstructors
Mind Control Stimulants
Primal Mutation
Forced Assimilation