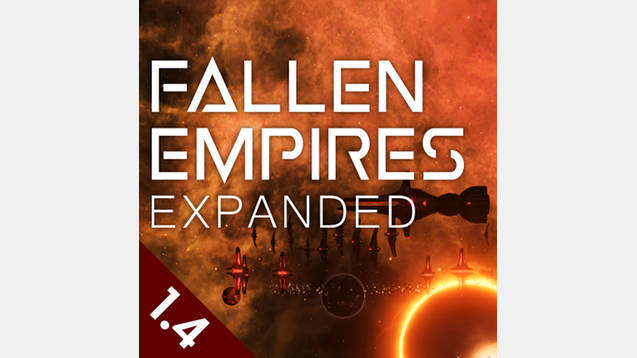 Version 1.4 for Stellaris 1.6 “Adams”
Fallen Empires are ancient, stagnating but extremely powerful empires, fully developed at the start of the game. They serve as late-game adversaries and can be allies or opponents of the end-game crisis, War in Heavens.

By adding new personalities types and attributes, this mod works to breath more diversity and character into fallen empires. More varieties of fallen empires will spawn along with their unique homewords and ethos-related colonies.

Due to the vast size of galaxies in Stellaris, it may take you a lengthy time to experience what this mod has to offer.

A new save game will be required to experience the best of Fallen Empire Expanded.

Binary Stars – Two stars orbiting one another, each having their own family of planets
Brown Dwarfs – A supermassive gas giant with a plethora of orbiting planets
Trinary Stars – Three stars; two sharing a barycenter while orbiting the third, larger star
◢ New Conditional Spawn system
Are you concerned of a Commonwealth of Man, United Nations of Earth, and now the addition of a fallen human empire breaking your immersion?
Fallen Empire Expanded pre-emptively checks the existence of Earth-based human empires (CoM or UNE) before spawning in a human fallen empire.
There will only be one Sol in your galaxy.

Nothing
What is added? – New files added by this mod

This is the unfortunate consequence of some mods that replaces entire files and folders, with complete disregard of overwriting, to make minor edits and changes.

Fallen Empires Expanded will not cause conflicts with other mods; however, other mods may cause problems for this mod.