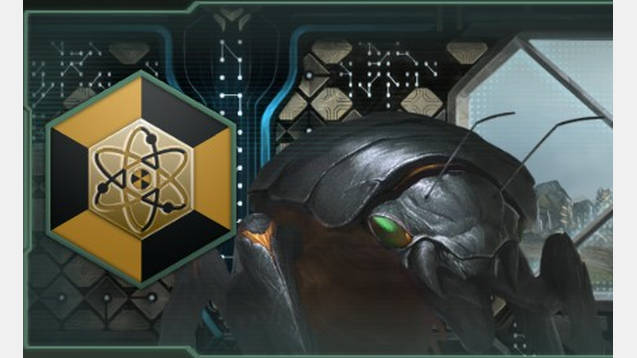 Prescripted Cockroach Empire : “United Cockroaches of Earth”
Nuked Sol System Start* : System modeled after Earth’s solar system, with a tomb-world Earth.
Unique anomalies: Adds two unique anomalies based on the unique anomalies for the prescripted humans in the base game.
Ingame Descriptor:
“Following a devasting nuclear war that wiped out humanity, the Cockroaches inherited the Earth. Thriving in the radiated environment, large mutated species of the human’s household pest took to the light and formed rudimentary communities. Eventually the Cockroaches stumbled into a vault of pre-war human technology, rapidly advancing their society. Realizing their homeworld’s history, they gained great respect and a reverence for those pre-war humans. Vowing to never repeat the mistakes of the past, the Cockroaches took to the stars bringing with them a message of peace.”

Compatible with 1.6.2 Adams. Also works fine with 1.7.4 Bradbury.
Accessible for all languages (although text is only in English)
Should be compatible with any mod. No files were altered in the making of this mod.
Game will not break if you disable this mod and continue to play as the Cockroaches of Earth, just the unique events will not fire.
Have not tested the “Horizon Signal” dlc against this mod yet. If you do and find an issue let me know.
Other Mods:

Tomb World Creation: Mod that adds the option to terraform planets to tomb worlds.
Tomb World Start Systems: Mod that adds 4 unique tomb world start system initializers. Each tomb world start system has a random setup and has a unique bonus start feature related to it and unique start message.
*Note: If you’d like a challenge, Nuked Sol System start can be used by any empire. It creates a tomb world Earth, but you don’t get the tomb world habitability trait which means you start with your pops basically hating you. The neighboring systems should have continental worlds as per a normal Sol System start.

*Note from Author: This mod is intended to have a minimal impact on gameplay without creating or changing game assets. Should be compatible with any mod, though if you find a bug (that’s not a cockroach!) let me know. I welcome input on any future ideas or feedback on current ones.