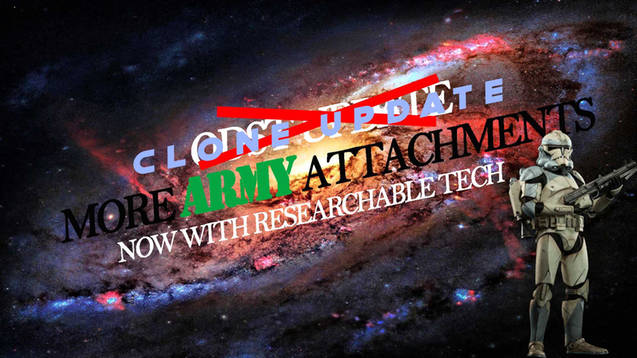 Update: I have started a new HOI4 Mod so this mod will now only be updated when a patch comes out, There will be new content but at a slower rate, Thanks to everyone who likes the mod. Stay tuned for HOI4 Mod new!!

This mod will let the player add more attachments to their armies.
Right now there are 19 attachments,15 Researchable techs and 9 New Armies to get. The idea around this mod is to add attachments being realistic or fiction . The majority of this mod will be focused on the attachments side.

Future Updates – More military attachments from this era that will be staring attachments.(Not general idea i.e Snipers or tanks). May add star wars but in a different mod and who else knows Subscribe now to get the attachments. During the development of this mod I add more upcoming list as I think of them.

*(They are still being worked on I’m looking through the tech to see which tech should unlock each attachment, some may be starting attachments)

(For Vales go to the suggestion discussion and click on the link. All values are posted there and there tech req. You can also leave a suggestion.)