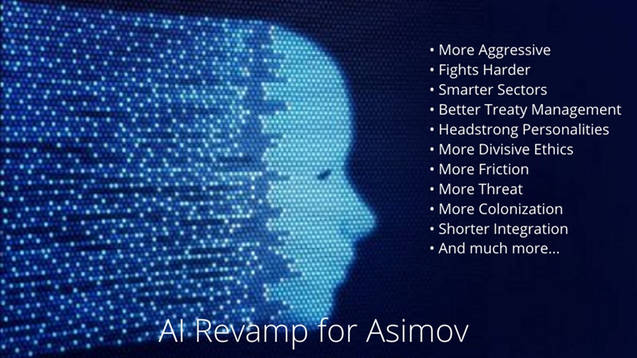 This mod provides a major overhaul to the AI in the Asimov 1.2.1 patch, it makes the game harder, and allows it to feel more ‘alive.’ Aggression and openness to treaties (based on dependent factors) have both been increased. Sectors have been improved upon, also. (Thanks to Enhanced AI.)

Many thanks to Enhanced AI by Anex, which I used for configuration of some of the values of this mod and the sector alterations. Go take a look at his if you can, there’s some key differences in mine and his. (His changes trust defines, not personalities. His increases base aggressiveness less. His touches different opinion modifiers, etc)

Default AI personalities have received major overhauls, with increased aggressiveness, bravery, and threat/border friction.
• Migration is now more common, as is purging, dominating, and especially uplifting. Weights have been altered to add more variety in AI personality. Self-interested empires will now conquer others whenever they get the change. Evangelizing zealots will fight other evangelizing zealots, because they’re meant to be the ‘one true faith’ kind of personality. The ‘good’ empires will try to fight these with alliances and wars.

If you are peaceful, you will have to fight to survive the blobbing, self-interested empires, especially earlygame. The AI is capable of doing it, but sometimes they just die. The ‘evil’ empires will attack you very quickly now. Exploit their wars between eachother and attempt to gain allies, otherwise you may not survive long. And even regardless of self-interested empires being dealt with, wars will break out based on ethical and governmental differences.

Diplomatic Opinion & Gameplay Changes
• Opinion modifiers altered to polarize opinion between opposing ethos further.
• Integration is shorter, and uplifted xenophobes don’t hate their masters at all.
• Border Friction cap has been doubled, and systems are twice as contributing to border friction.
• Threat has been slightly increased across the board, to encourage further alliances.

AI is much, much more aggressive, base aggressiveness has been doubled.
○ This doesn’t always necessarily lead to all-out war, however. But war is now an ever-present part of galactic diplomacy.

AI Resource Management & Sector Improvements
• AI puts more energy and income into war, and is much more headstrong with it’s fleets, willing to go on the offensive more.
• AI spends a bit more minerals on ships, and prioritizes energy a tad bit less, and spends a bit more on robots.
• AI won’t retreat from a battle until it’s fleet is at one-third strength.
• AI cap on colonizers/constructors increased.
• AI will colonize non-adjacent, but only as a last resort.
• AI will prioritize colonization until 8 planets, instead of 5.
• Sector Management has been improved, thanks to Anex’s contributions.
• To reduce player exploitation, trade willingness for monthly resources and sensor data has been slightly reduced.
• AI is slightly more willing to trade.
• Research agreement value has been raised slightly.

Treaties and Diplomacy Improved
• Alliances are generally much more likely, to attempt to get the peaceful AI to survive against warmongers.
• Opinion matters more to AI with alliances, and mutual rivals matters less.
• Opinion matters less to AI with defensive pacts, but mutual rivals matters more. (1.2.1 kinda broke defensive pacts. Try reloading the game.)
• AI is more open to non-aggression pacts, and opinion is more important to them with those.
• AI is more open to Migration Treaties, and opinion is slightly more important to them with those.
• AI makes federations slightly faster, and vassalizes slightly easier.
• AI is less likely to leave an alliance, and requires an alliance of 4 to start votekicks.
• AI cares less about war philosophy with alliances (alliances themselves are usually to empower defensive personality types anyways.)

This mod will be undergoing updating, revising, and testing as testing and feedback deems changes. Feel free to leave a comment on it. Thanks for subscribing.

If you want others to know about this mod, leave it a positive rating!
Some sidenotes:

• This mod only makes the AI more likely to go to war when circumstances dictate it, however in Asimov the AI circumstances for going to war have been changed. It was slightly improved in 1.2.1, but if you apply this mod to 1.1, they would still war a lot more. There will be bouts of peace, still.

• I recommend using mods that add mapmodes, as the AI’s tendency to colonize slightly further away can create some border gore.

• The Mod collection at the top of the description has a bunch of mods I’m fairly sure are compatible with this, recommend you use some of ’em if they’re to yer’ fancy.

• The changelog is located in the discussion thread below. I update it frequently.

• Geography matters a lot in Asimov. If you want more war declarations and a more active galaxy, play on spiral or ring.