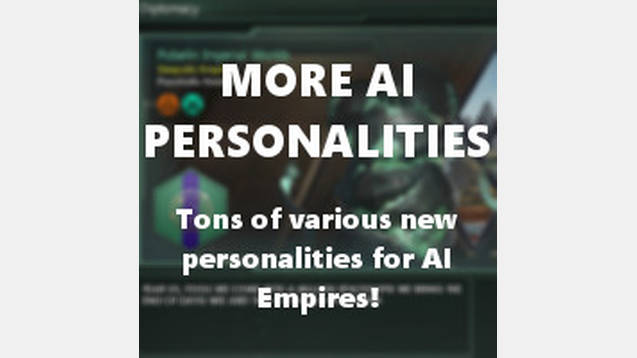 Current Version: 1.4.3 (Released 6/15/17, Compatible with Adams Patch)
MAP introduces new AI personalities to your game, adding more diversity to your playthroughs. There are a wide range of new personalities, ranging from warmongers to peace-lovers. Some have real-world/historical inspirations, others are based on fictional ones, yet others are completely made up. Though some of these personalities will be quite similar to existing ones, I’ve tried my best to make each unique in terms of behavior. Each personality will also come with unique custom diplomacy text that can appear in-game.

This mod should be compatible with most other mods except those that add in new backgrounds. The only vanilla files it changes are “common/opinion_modifiers/01_personality_opinions.txt” and “gfx/portraits/asset_selectors/room_textures.txt”. However, please note that any mods that add or remove ethics, traits, and civics will likely cause an imbalance in the chances various personalities will spawn as the chances various personalities were spawned were coded with vanilla in mind. Due to the nature of this mod, it is being continuously tweaked in regards to how likely AI personalities are to appear, their behavior, and so on. I will continue to tweak existing personalities, and add new ones, as I see fit.

For requests, bug reports, and other comments, PLEASE POST IN THE PI FORUM THREAD HERE, THANK YOU!

List of New Personalities
Currently, there are 50 new AI personalities which are listed below. More will be coming! For an explanation of every personality, their inspirations, and intended behavior, click here.