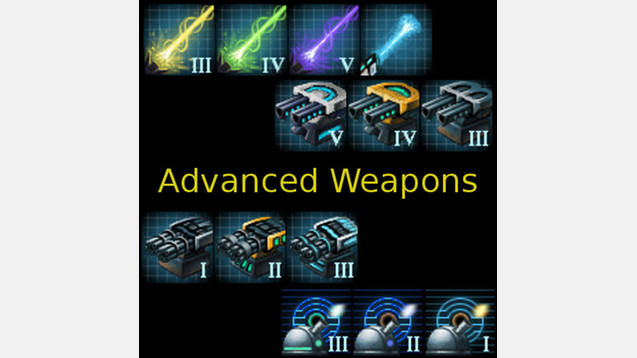 (05/05/17) Update.
1. Some balance changes:
1) Ivory Lance’s tracking value has been halved and a bit more expensive.
2) Nerfed the 6th tier of amoeba bombers and fighters a bit.
3) Buffed the twin-linked autocannons (more precisely, their min damages have been slightly buffed)

(04/06/17) Update.
1. “Updated” for 1.5. It seems there isn’t any significant changes on weapon tech, and you should have no problem using it. Working on several new stuffs now.

(12/03/16) Update.
1. The color of Ivory Lance is a bit blue-purple-ish due to some people feeling white effect of the lance too strong.

2. The space amoeba strikecraft will move more gracefully…. with exchange of being reduced in combat effectiveness. See how this fares out.

Available compatibility patches for other mods. Listed only with fully working with 1.3+
*Beautiful Battles no longer needs a comp patch, thus the file has been removed.

*Downscaled Ships no longer needs a comp patch either.

*I HIGHLY recommend to use Advanced Ship Behaviour Modules mod (no, despite “Advanced” word I did not write that mod.) This solves a lot of problems regarding ship balance and formation. It is highly recommended to use the compatibility I provided to fully benefit from ASBM.
About this mod
For longer and grand games, this mod adds several advanced weapons.

1. New powerful X-Large energy lances for your battleships and bigger ones (3 variants + 1 Titan Beam variant.)
-Very hard-hitting lances with some tracking. Some later tier lances have some strict requirements to obtain.

2. Twin-linked Autocannons for little ships and twin-linked Kinetic Artillery cannons for broadside ships (3 variants each.)
-Both are reasonably powerful, requiring a lot of minerals but low power. They are not great at piercing armor just like their vanilla brothers.

4. 6 sets of new Space Amoeba strikecrafts, including both bomber and fighter variants (6 sets.)
-Fast and powerful when strikecraft AI is un-bugged. ????

-Last two tier Amoebas are immune to vanilla strikecraft countermeasures thanks to shield. You may want to bring some flaks and/or Aegis point defense.

-Command your mech warriors…. I mean, ships to kill your targets with these slow-firing, accurate and deadly long-ranged energy/kinetic hybrid.

-Just be warned, they have (some say, significant) minimum range that have to be considered… Well, just like Battletech really (tho none of PC games actually implemented this min range properly.)

7. New, but rather boring three variants of mass accelerators. They do have decent stats and increased range…. that’s it really. But you will find them much easier to obtain and far less time consuming compared to high level lances. Good choice if you are unlucky with lances.

Q: Does Fallen Empire use these weapons?
A: No. It is intentional to make this mod compatible with other mods. Otherwise I have to override a lot of stuffs, which cause a lot of problems.

Q: How about crisis?
A: No. And this is even more tricky because the codings and the engine of this game are quite glitchy for crisis in general. This is one of the reasons why you won’t trouble even if you have researched Annihilator Lance, despite the fact it is labeled as a dangerous technology (for now.)

Q: Hey, is overpowered!
A: Yes, or no. No one knows. Notice my weapons are usually expensive and require a lot of power.

Q: Does this mod require any DLCs?
A: No.