War Score Mod (OBSOLETE AS OF v1.1) For Stellaris 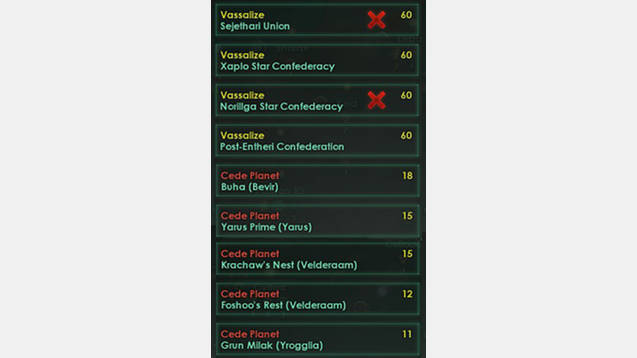 War Score Mod (OBSOLETE AS OF v1.1) For Stellaris

***IMPORTANT** 5/30/2016 – The v1.1 update fixes a great number of things regarding warscore and vassalization, mostly intersecting with this mod. The patch changes are, in my opinion, better than what I’ve done here and, at the very least, I’m satisfied by Paradox’s updates. While this does cut me off from some work I’ve been doing on the mod, I believe the v1.1 patch makes this mod extraneous. Therefore: THIS MOD WILL NOT BE UPDATED TO v1.1 (CLARKE).

NOTE: Likely uncompatible with the Expanded War Demands mod, as both mods modify the 00_war_demand_types.txt file. Let me see what I can do.

UPDATE V1.11 –
Increased the maximum size of vassals to 10 colonies and protectorates to 15 colonies.

v1.0 –
The war score values of planets have been modified so as to allow an attacker to claim more worlds for a successful war. Here’s how the modifications go:

The end result is that planets tend to be worth around 15 warscore for a well-developed non-capital planet, 20-25 for a capital world, and down to around 9 or so for minor border planets. In each war, then, an attacker can conquer between seven and nine planets per war as opposed to three or four. In the future, I’m looking to do a more dynamic warscore calculation based on relative number of planets held on each side.