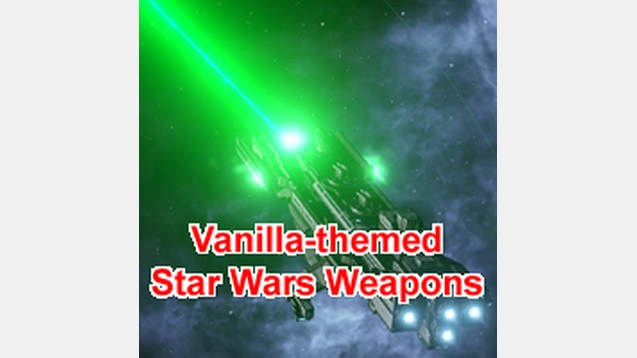 A few weeks ago, I wanted to do a Star Wars-themed playthough of Stellaris, but found myself disagreeing with some of the design choices of the only Star Wars weapon mod. While certainly very well done, with a multitude of options, it’s implementation felt somewhat out-of-place in Stellaris. So, I set out to make my own, simplified, version more inline with the other weapon schools in vanilla Stellaris.

Although some of the features I wanted to add (such as making it a starting weapon class) were technically unfeasible, I have been able to preserve what I consider the core elements of a vanilla weapon class.

Features:
5 Tiers of Blaster weapons in three colors (Red, Green, and Blue). These are highly effective against armor, but slightly weak against shields.

3 Tiers of Ion weapons, each with their own color. These are extremely effective against shields, but nearly useless for anything else. You would be best suited using only one or to per ship.

3 Tiers of Quad Turbolasers in three colors (Red, Green, and Blue). These have a slightly shorter range than standard Blaster Cannons/Turbolasers and are worse against shields, but fire twice as fast.

3 Tiers of Laser Cannons in three colors (Red, Green, and Blue. These are PD-slot weapons with comparable stats to the Flak Cannons.

3 Tiers of Spinal-mounted Weapons. The Proton Beam Cannon (based off the weapon of the same name from Admiral Piett’s Star Destroyer, the Accuser) and the Composite Superlaser (based off of the weapon from the Eclipse-class Super Star Destroyers) are of comparable strength to the vanilla XL-sized Lances, while the Converging Superlaser is comparable to the Titan Laser. Don’t expect to be able to fire the last one off more than 2-3 times per average battle. Additionally, they have a high cost and energy use, and require you to have researched both Composite Superlasers AND Tachyon Lances.

Although I as ultimately unable to make them into a starting weapon, the Tier-1 Turbolasers (Particle Blasters) are guaranteed to be available for research at the start of the game.

If you are looking for a more in-depth Star Wars weapon mod, I recommend you take a look at Elratie’s “Star Wars Turbo Weapons”, linked below, which is a fantastic piece of work.