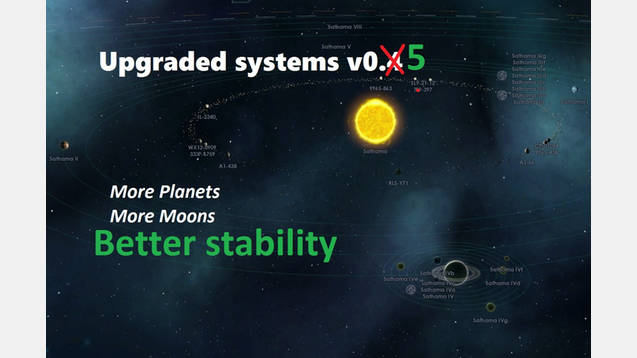 MOD CONTAINS:
*more planets in system
*more moons (gas giants can have lot of them)
*starter systems with decent buff
*Other systems has got some more planets, is possible have around 25 planets in one system, some of them colonizable

WARNING NAVIGATIONAL HAZARD
Mod is in alpha stage, shoud be stable, but somehow the results of randomisation may be crazy. CTD bug when clicking at particular system is known (1-2 bugged systems in your galaxy)
If you find anything wrong, just tell me.
***0.4***
MOD STABILITY: 99% and working to fix out that 1%

!!!
THIS MOD AFFECTS PERFORMANCE BADLY – having densier systems with this mod is similiar to having 3 times more vanilla systems.
I DO NOT RECOMMEND PLAYING MAPS BIGGER THAN 600 SYSTEMS – because LAGS
!!!

*Now having a system with 5 habitable planets is nothing rare(but still uncommon)
*Stars have been increased in size (A and B stars are 3x 4x larger). Black hole is 1/4 his original size. I want to show a bit more from real space with keeping actual gameplay.
*Minimal planet distance from star has been doubled in most cases. Habitable area has been increased twice. Max system size has been raised to 500 (25% increase)
*Generally the systems are bigger both in distances and in object count

TO DO LIST
Check the orbit line bug (in large systems some far planets don’t have any orbit lines) – partially done. Orbit lines shows up to 32 planets and moons in system, the limit of objects per system has been capped at 64.
Improved planet distances from one another, try to make it randomly picked for each planet – 75%
More cold/arctic/barren planets on system borders – done
Make gas giants great again
Much greater gaps between orbit lines of plantes – the space is vast and cold, at all – struggling with system size – not easy to do, causing CTDs, delayed

changes in 0.3 release:
Faster ships. The game may turn boring if you need two months to cross one system across.
changes in 0.4 release:
System max scale put down from 2000 to 500 due unablity of wormhole station construction. Now they should be buildable in +80% of systems. Why not in all of them? I tried to expand the systems as much as possible without backstabbing wormhole nations. Is in plan to make their reach bigger to balance it.
changes in 0.5 release:
Lowered the count of planets in systems in big systems, now they are more average
Gaia planet probablity lowered (no gaia spamming anymore)
Toxic planet probablity lowered (now there should be more rocky worlds)

WISH LIST aka Soon(TM)
More types of planets and make dedicated researches for them
Binary stars
Brown dwarfs, neutron stars and tiny black holes as regular “planets” (Brown dwarf is just a big hot gas giant)
Moon orbiting a moon orbiting a planet orbiting a star orbiting a central binary star
Planet “specializations” – planet where one resource is in abundant quantity while others are rare (like 15 out 20 tiles for minerals)
Dual or even trial belts of asteroids

You may encouter missing orbit lines, I am currently clueless about fixing it. It looks like it doesn’t involve gameplay in any way, so it is not a hot topic for me for now. As soon as I find a solution I will implement it.