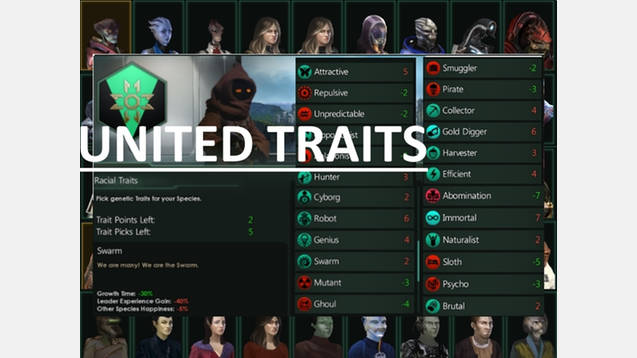 This mod contains 65 traits for species inspired by various Sci-Fi themes (from Star Wars, Mass Effect, Star Trek, Doctor Who, Stargate, StarCraft to Fallout). New traits are defined in a separate file, therefore vanilla traits are not affected. These traits are more or less balanced according to initial game traits.

Supported languages are English, German, French, Spanish and Russian. Please contact me if you can translate to another language supported by the game.

Please let me know if you want some area covered by a new trait (discussion link). Even more traits will be added later on. Some minor tuning is possible to keep features of traits consistent with assigned points. You can let me know your comments regarding balance here: discussion link.


Trait Hive
The mod has trait Hive which was created before Utopia :). Also it allows highly unified play style without negative/positive features of Hive-mind and it is an option for players who do not have Utopia.

Conflicts with other mods
The mod adds only new traits and nothing else. Only possible conflict if the same trait (names match exactly) is added by another trait mod.