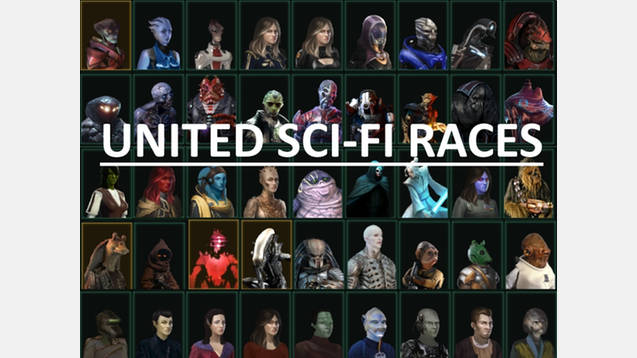 This mod is an effort to combine, improve and revive portraits from all available science fiction mods specifically the ones that are no longer updated by their creators. It is an independent mod with focus mainly on portraits. Now there are 190+ races (90+ animated) and increasing.


There are also included name lists and planets/systems, but other modifications (prescr. empires, race traits, overhauls, predefinitions) are NOT included as my idea is to make it as universal as possible. If you need additional traits, you can get them from this awesome mod inspired by various sci-fi themes.

Random spawning
Random spawning is set to NO, so You can decide what races are included in your game. However, if you want randomly spawn races / AI to use any race, you can subscribe this mod patch that activates randomisation for all races mod link.
If you want ONLY animated races and randomly used by AI, please use this patch mod created for at request mod link.

Also:
Please see also what content of other mods were used for this mod in specific discussion thread. You may also suggest races from outdated mods or new race you have been looking for. No promises, but I consider each suggestion and appreciate your feedback. If You like it, please rate it :).

Naturally I cannot cover all Sci-Fi races/factions, but I will do as much possible from my side to create, animate and improve current mod content that we all could enjoy this awesome game mixed with other sci-fi themes.