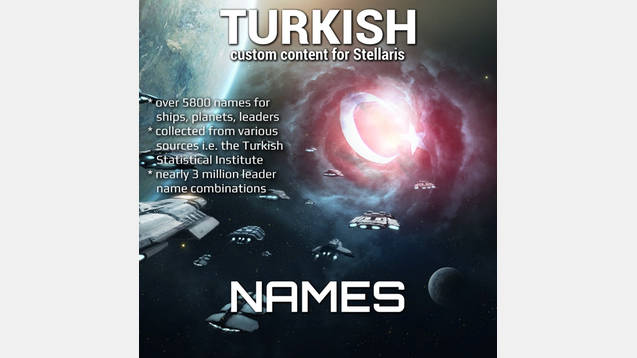 A Turkish themed custom name list, featuring over 5,700 entries (most of them unique) for ships, planets and leaders. Fits with my other Turkish custom content mods such as Turkish Emblems and Turkish Republican Music. Whether you’re here to become the kebab or to remove it, you hopefully won’t regret using it!

Planets:
625 entries spread between the nine planet types (and Gaia). Based on Turkic mythology, provinces and districts with relevant names or locations.

Leader names:
– The 1st character namelist, “Turkey 2017”, is limited to 300 male and female most used Turkish names in 2016 according to the Turkish Statistics Institude (with limited custom additions to get to 300). A necessary change to limit the number of rarer, more outlandish names from propping up.
– The 2nd character namelist, “Pure Turkic” [sic] is based on a Panturkist website’s advice for names directly taken from Old Turkic languages. 2347 M and 600 F first names (also used as surnames). Regal names based on historical and mythical Old Turkic rulers.
– The 3rd character namelist, “Ottoman”, is based on both EUIV’s Ottoman names and a vetted database of common Ottoman names in the 17th century. Regal names based on historical Ottoman rulers and people of influence. 150 M and 150 F names 273 surnames.