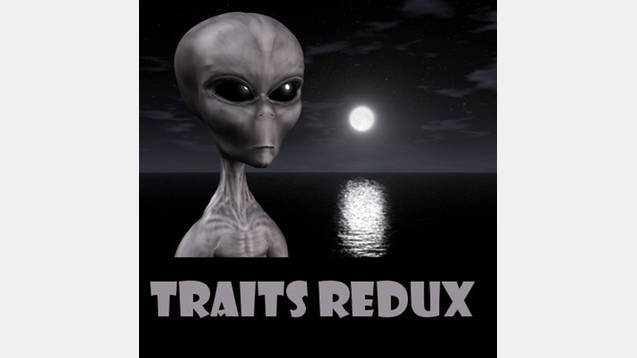 TRAITS REDUX adds 16 new Species Traits and 15 new Ruler Traits to Stellaris and allows you to select your starting ruler’s traits. Many thanks to Naselus on the Paradox Forums for talking me through the corrections!

PLEASE RATE: need just a few more to get the mod’s score listed.

##### SPECIES TRAITS: Some are brand new, others add new levels of existing traits.

##### RULER TRAITS: Some are good, some are bad, some are a mixed blessing.

*Great Wit: This leader is eloquent, funny and admired for it.
Influence +1; Empire Happiness +5%

*Cantankerous: This leader suffers fools badly. While admired for this it does cost political capital.
Influence -1; Empire Happiness +5%; Army Morale +25%

*Paranoid: This leader is convinced that the galaxy is out to destroy them and their people.
Influence -1; Fleet Size +20%; Army Cost -10%

*Ruthless: A leader who will stop at nothing to get their way.
Influence +1; Empire Happiness -5%

*Heavy Handed: This leader is known for being cruel to dissidents and harsh towards failure.
Influence +1; Empire Happiness -5%

*Scandal Magnet: This leader’s many scandals eat up a great deal of political capital.
Influence -1

*Navy Focus: This leader is dedicated to creating a powerful navy.
The cost of all warships are reduced by 10%

*Army Veteran: This ruler served for an extended period in the army and understands how it operates.
+25% army morale; -10% army upkeep; army_rank_increase = 1

*Navy Veteran: This ruler served for an extended period in the navy and understands how it operates
ship_upkeep_mult = -0.15; ship_speed_mult = 0.2

*Scientist: This ruler has a scientific background and knows how to best direct technological research
+5 all research areas.

*Civil Engineer: This leader has an engineering background and knows how to direct large-scale building projects.
Clearn planetary tile blockers 25% cheaper and faster.

*Talented Administrator: This leader understands bureaucracies and how to get the most out of them.
+5% Energy; +5% Minerals; +1% all research areas.

*The new traits should be compatible with other mods, including those that add new traits.