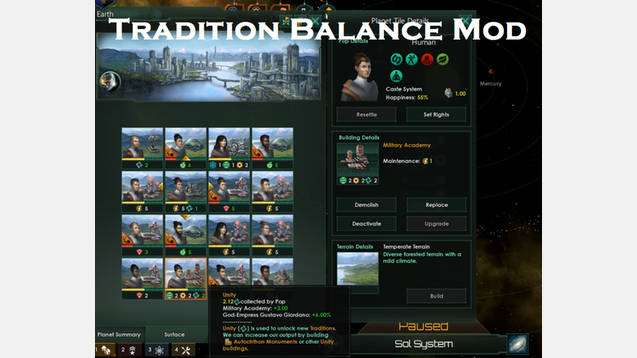 This is a minimalist mod that tweaks the balance of the vanilla tradition trees. With the goal of player freedom, my view is that your unity gain should be based on your ethos, policies, empire size, and species composition, not on which traditions you pick first.

To accomplish this goal, this mod does three main things:

1) Adds unity buildings to all of the trees, instead of just in Prosperity, Diplomacy and Harmony. Now you can pick your favorite tradition as a starter without worrying about slowing your long-term access to other traditions by not getting new unity buildings.

2) Replaces the Expansion tree’s “Courier Network” tradition. In vanilla, this tree is close to a must-have because the -33% to colony penalty bonus makes an enormous difference on the number of traditions you are able to unlock over the course of a game. To open up more possibilities for players, the colony penalty has been reduced across the board (from 25% to 15%, comparable to the 16.7% penalty you used to receive with Courier Network), and the Expansion perk has been replaced by something else that fits the rapid growth theme of the Expansion tree.

3) Improves the game’s AI to make it prioritize unity buildings. Now you might actually see some AIs build habitats or ascend!

A full changelog can be found in the pinned discussion. The mod is officially for 1.6.2, but it also works fine on the 1.7.x beta. I’m very new at modding, so constructive criticism is appreciated, especially regarding balance and the AI tweaks. I’ve tested the mod myself over several games, but ultimately there’s only so much one person can do, so if you see anything that doesn’t seem to be working, just let me know!

Thanks for reading, and enjoy!