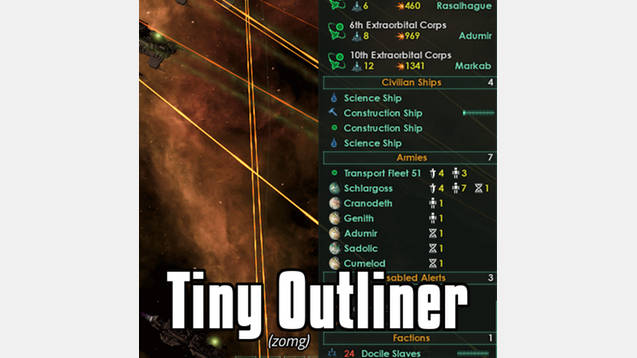 Tinyifies lots of stuff in the Outliner!
Compatible with 1080/1440 addons, my Tiny Planets (in Outliner) addon, and most likely every other addon you can find.
Moves the war icons and federation icons from the bottom right corner and up to the top LEFT corner of the screen.
Moves the music player to the lower RIGHT corner of the screen, courtesy of DrMaple/1080p mod, with permission.
The mod is compatible with Ironman-mode and achievements.

This mod does NOT touch the planets or military fleets. On purpose, because I figured many people want those to be big-ish.

So this mod tinyifies the following items:

Civilian fleets (science, construction)
Transports (armies)
Observation posts
Disabled alerts
Factions (doesnt really make them smaller but tidies them up)
Terraforming
Sectors
I was thinking I should probably do the subject integrations as well, but frankly they dont concern me that much.

The mod also moves the outliner window up to the top right corner, like the UI Overhaul 1080p mod by DrMaple.