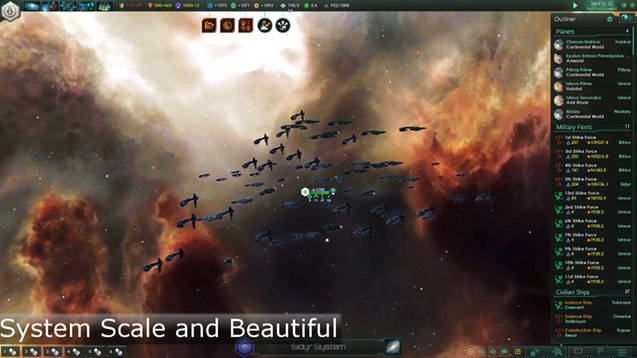 See Change Notes!!!!
I absolutely love the two mods Distant Worlds: System Scale and ZBeautiful Battles . However, if you use them together there are a few problems so a few files need to be changed to have a good experiance. So I decided to make those changes and share it on here. Now keep in mind I did not make these mods I simply took the two mods Distant Worlds: System Scale and ZBeautiful Battles and merged them together and tossed in Stellar Trails Disabler because its needed. Then I made a few minor changes to make them blend better. after the scaling is done the ship’s engine trails are way to dense. Because of this I added Stellar Trails Disabler . Later I’ll try to make one that just reduces the trails. I don’t know how to do it but will try.

The reason I changed these things is basically as you can see in the pictures when they are used together they need to take each other into account or it makes playing a little difficult.

Key things to note.
If you are not starting a new game you will need to rebuild space stations
to get them in the new orbit. They will not move on their own. Also make
sure to turn the original versions of the mods off while using this
one so there is no conflicts.
If you use this mod Beautiful Universe v2.0 you may have a hard time seeing
ships. I like this mod too but keep in mind you may have a hard time seeing
your ships
Now this whole thing is basically so me and my friend can play with these mods but not have to edit files on both ends. I recommend you go to the creators of the mods and get there versions. they work greate on there own.

last thing if either author has a problem with what I did here or wants me to put there names anywhere (dont want anyony mis understandings) just let me know.