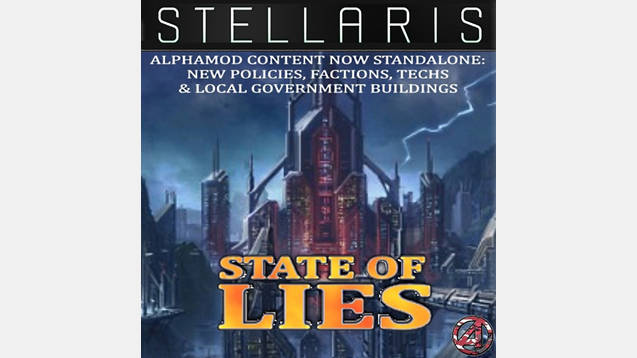 New policies, factions, local government tech & buildings.
All content is taken from AlphaMod. If you use AlphaMod, you don’t want this.

Adds new policies for tweaking various settings of your empire. See slide 2 for the full list and try them out in a new game to see what options are available.
Expands vanilla factions so that the various new policies can factor into their happiness.
Adds new factions that are far more ‘extreme’ variants of vanilla factions. These tend to have more unhappiness than happiness factors and also tend to have demands that conflict with the vanilla faction they share a guiding ethic with.
Adds new technologies for unlocking local government buildings, specific to your empire’s government and/or ethics.
Adds new empire edicts unlocked by combinations of civics, technologies and ethos.
EMPIRE EDICTS

For the Cause: At times of war everyone must make sacrifices and must be prepared to work harder towards achieving victory.
Mandatory Education: All citizens are required to receive a state-provided education.
Mandatory Service: All citizens are required to enlist in the military when they reach adulthood and remain enlisted for a minimum term.
Mining Investments: Convert surplus energy credits into minerals.
Mineral Wealth: Convert surplus minerals into energy credits.
Promise of Eden: Let the galaxy know that our empire is a place of peace and prosperity for all.
Secret Police: Eliminate internal security threats with a covert police force dedicated to routing out disloyalty and preventing terrorism.
Content is taken from AlphaMod, AlphaMod: The Cost of Living and AlphaMod: Tweaked Attractions. If you use AlphaMod, please use the supplements and not this.

COMPATIBILITY
All vanilla files are modified in common/pop_faction_types