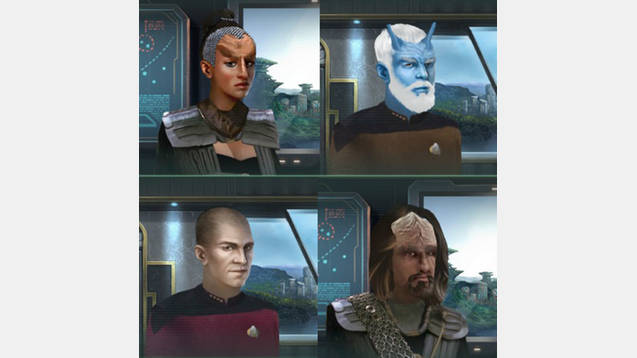 Update 5: This latest update comes courtesy of walshicus and his awesome work recreating Bolians, Cardassians and Bajorans. As always, you can use the ready to play prescripted empire, or you can find the portraits in the ‘Trek’ tab. Now that we’ve got a baseline of races, I think I’ll add period uniforms.

Update 4: Here are the Klingons! The cosmetic selection is a little sparse atm, but filling it in shoudln’t be a problem. You can play as the prescripted Klingon Empire or select the race from the ‘Trek’ tab. Thanks to Ooiue for his Star Trek Systems initialiser and to Swiss Knight for the Star Trek Emblem Pack. Next up, Bajorans, Cardassians and some more uniforms!

Update 3: The Federation is now a separate species, restoring vanilla humans in the game. Next update is going to be Cardassians, Bajorans and Klingons!

Update 2: The Federation expands! I’ve added Vulcans and Andorians (sorry Tellarites) and some flavour text. As of now the mod replaces the regular human empires. Let me know if you want something in particular!

Update 1: Female leaders now have properly adapted costumes. Will add races in the next update.

Feel free to grab anything for use in other mods, just remember to credit!

p.s. if you were running the older version of the mod that overwrote human portraits and want to continue playing on that save, here is a compatibility mod to revert back. Warning, I won’t be updating that version anymore.