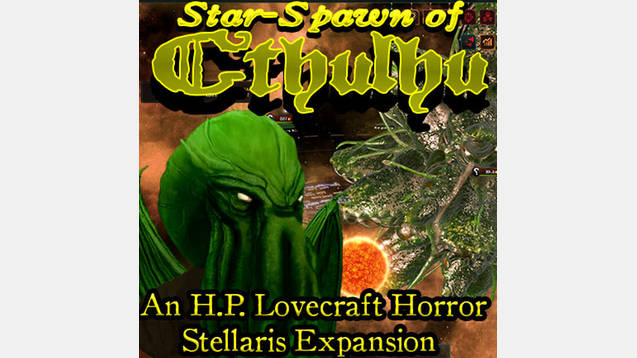 Using H.P. Lovecraft’s beloved Cthulhu Mythos as an inspiration, here is a Stellaris expansion to allow you to experience Lovecraftian horror in Stellaris. Now 1.2.5 Compatible

**Sixth Update** Mi-Go are now an empire with updated graphics and new traits. Flying Polyps (and hopefully Polaris) are next. Thanks for your patience, everyone.

Features
8 new empires and 11 new ‘Cosmic Horror’ species with 66 variations total.
2 Custom Governments & 6 Traits
15 custom H.P. Lovecraft inspired flags.
3 Custom Starter Solar Systems
Sanity Loss Effects
New Ship Type Cosmic Horrors
New City Type Non-Euclidean Geometry
New Name List: Cosmic Horrors
New Cosmic Horror & Cosmic Indifference AI Personalities
Flavor Text & Diplomacy
Shoggoth slaves and army technologies
Necronomicon appears in new games to give players the option to spawn the Old Ones in their universe or not
Azathoth now can appear in your galaxy, and there are custom galaxies with Azathoth at the center.
Color Out of Space introduced as a terrorist weapon usable against other civilizations.
Update 3 Fixes:
-AI Personalities are appearing properly.
-Empire spawns now have proper leaders.
-Shoggoths start with their technologies unlocked
-Necronomicon now allows users to choose to have up to 7 cosmic horror races, or up to 5, or up to 3, or none at all for great flexibility.

Call of Cthulhu by UntrustedLife
Thanks List
Honestly, this is my first mod, and there was a lot of hard work put into this project, but I am mostly standing on the shoulders of great artists and modders. Firstly, thanks to the Stellaris devs. I love how moddable this game is!

Mods that Helped me design this: