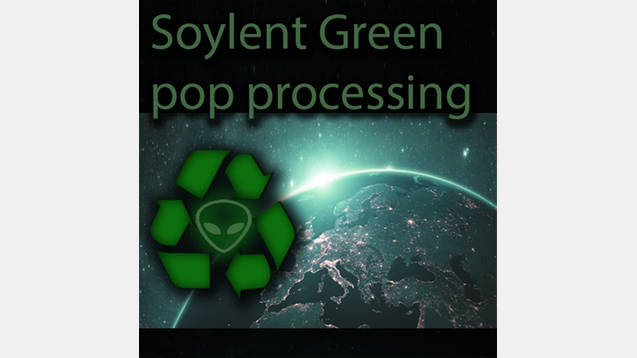 “A new way to sustain your overpopulated worlds! Solyent green is a new food made of high-energy plankton from the World Ocean, more nutritious and palatable than its predecessors”

This mod introduces one new technology and building that focuses on population processing. In short, your populace becomes something useful and forms an alternative way of removing pops besides purging.

– technology that follows up from xenology, which allows you to construct a Soylent Green Factory. Pacifists and scientists with biology have a stronger affinity to get this tech.

– allows access to the Soylent Green Factory that adds 6 food and 6 social research, along with 5% happiness.
– this building is unique. The AI will not build this due to concerns of how the AI handles pop growth.
– every year a population disappears on the planet, though you get 75 social research in return. If a planet has 1 pop then this effect will not occur.
– robotic pops are not consumed.

– disabling the building will not stop the disappearances due hardcoded limits. Destroying it however will.

– balance (need suggestions)
– tying in new events to it at a certain chance.