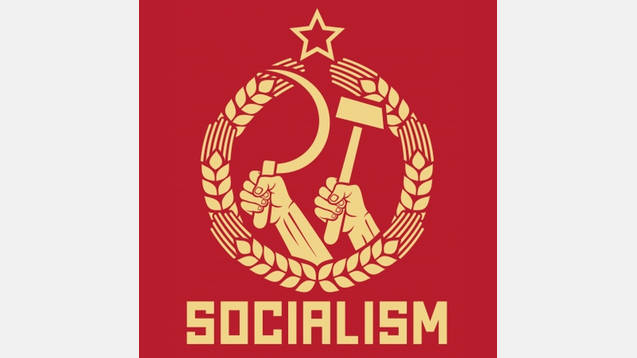 ¡Oye, comradas! Like you, I was disappointed to learn that the only materialist oligarchy in the game was some kind of nerd huddle of technocrats. To remedy this stark omission, I made a small mod to allow for state socialism in the 20th century, Marx-Lenin-Mao style.

REQUIREMENTS
some degree of (Dialectical!) Materialist
some degree of Egalitarian
no degree of Pacifist
Vanguard Party civic
VANGUARD PARTY
Start the game with a powerful Vanguard Faction.
Can automatically suppress other factions, as well as ban them outright.
Vanguard Faction Attraction: +50%
Faction Influence Gain: +50%
DEMOCRATIC CENTRALISM
A new policy, Faction Activity, allows your empire to automatically suppress all other factions.
For 150 influence, you can also ban a faction. Pops are tempted to immediately renounce membership from banned factions, and those that remain will eventually also leave or be arrested in the months to follow.
POLITICAL BUREAU
The government follows the typical oligarchical election pattern.
The ruler (“Premier”) has an agenda.
Elections every 40 ± 10 years, with emergency elections purchasable for 250 influence points.
New agenda, Cultural Revolution: +10% Governing Ethics Attraction, -10% Unrest
REEDUCATION THROUGH LABOR
Reimplemented for 1.5. Currently it occurs when Pops fail to leave a banned faction in time.
Enslaves Pops and applies a hefty “Governing Ethic Attraction” modifier.
Reeducation Through Labor can be enabled as a third Slavery policy option in addition to “Allowed” and “Not Allowed.”
GULAGS
Planetary edict designating a planet as a Penal Colony (tech prerequisite: Neural Implants)
Costs 0.5 Influence per month and 1 Energy Credit per planet tile per month (size 25 planet = 25 Energy Credits per month).
Convenient way to isolate pops undergoing Reeducation Through Labor, greatly improving their chance of reform as well as curtailing their ability to spread counter-revolutionary views to other pops.
Additionally, a new empire edict, Internal Affairs Commissariat (tech prerequisite: Galactic Benevolence), will do the work of moving pops to Penal Colonies with no additional Influence cost for resettlement.
Pops resistant to Reeducation on Penal Colonies may be given special attention.
Small chance of catastrophic industrial accidents
INTERSTELLAR REVOLUTIONARIES
An AI personality that occurs among socialist states.
More likely to occur when the empire also has the Xenophile or Militarist ethic.
Least likely to occur when the empire also has the Xenophobe ethic.
Turns Liberation war demands into workers’ liberations: Upon winning a war, the new empire has a Vanguard Faction installed and becomes a de-facto proxy of liberating empire.
Hates capitalists, aristocrats, bourgeois democrats, and theocrats.
POVERTY
Unemployed pops now eventually build slums for themselves. Think of this as being like the Shanty Town mod, except instead of it being good and convenient, it’s quite miserable: -15% happiness for the slum-dwelling pop, and -10% planet migration attraction
Living standards and other factors affect how long it takes for Pops to become slum dwellers:
Livestock Slavery: 3 months
Basic Subsistence: 6 months
Impoverished Conditions: 1 years
Decent Living Standards: 1.5 years
Social Welfare: 2 years
Utopian Abundance: Never
A pop unemployed on a tile with a building goes through two rounds: In the first round, the building becomes ruined. On the second round, the building is replaced with slums. Each round happens within the applicable time limit shown above. This rule does not apply to pops unemployed due to planetary bombardment.
Demolishing slums will make the slum-dwelling pops extra unhappy. Instead, replace the slums with a new building.
If you’re just not able to get into this feature, bring up the console and type “effect vanilla_slums = yes” (warning: will squash all slum-dwelling pops by dropping tile blockers on their heads).
To complete your in-game Fully Automated Luxury Gay Space Communism, check out Soviet Communist Music.