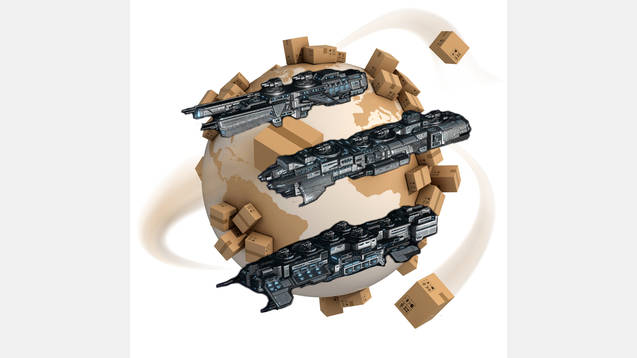 Purpose
This mod alters the fleet operations by introducing a logistics mechanic. The more ships you amass in the same star system, the higher your upkeep costs become and the less combat effective each individual ship will be.

Description
Each in-game month the mod dynamically adjusts the maintenance cost and combat power of your fleets according to their distribution over your empire.

Thus the total fleet size per star system is determined and if this size exceeds a certain limit, logistics mechanics come into play.

Economic Effects
Each star system can support a certain fleet size before logistic overhead is caused. The fleet size that is sustainable without penalty depends on the maximum naval capacity and the ownership of the star system. By default the following fleets are sustainable:

10 + 33% max. naval capacity in own star systems
10 + 25% max. naval capacity in foreign star systems
If the fleet size in a star system exceeds this limit, a scaled overhead is applied to the maintenance cost. In the midgame you can expect the fleet maintenance to go up by roughly 33%, if you move your entire, maxed out fleet capacity worth of ships into the same enemy system. The maximal penalty increases during the course of the game. In the late game the penalty can be as high as 50% of the nominal cost.

Combat Effects
In addition the combat strength of all ships is dynamically adjusted. In a massive fleet individual ships do not perform as well as in smaller task forces. The mod scales the damage output as follows:

Fleet size in system <= 10 : 100% damage output
Fleet size in system = fleet capacity : 80% damage output
Linear interpolation in between; the max. penalty is 25% if fleet capacity is exceeded.
Thus if all of an empire’s ships are located in the same star system, they operate only at 75% of their nominal strength. This penalty can be reduced by having high ranking admirals. Each admiral level reduces the damage penalty by 1.5%. In addition every own spaceport in the system reduces the penalty by an additional 10%.

The Goal of this Mod
I think the military-strategic gameplay of Stellaris is lacking at the moment. As Paradox does not seem to take any action in that direction, this is a poor mans try to do something differently:

Using multiple fleets at different locations simultaneously instead of a single “doom-stack”. Clumping up in massive fleets is now very expensive and less combat effective.
Offensive wars are now more expensive than defensive ones. Defending empires enjoy a superior position, because they can sustain a larger fleet presence with smaller cost.
Aggressors need to plan ahead and carefully prepare offensive wars with an appropriate war chest and excellent timing.
This mod is part of a project that I split up into multiple parts, to give the choice to use only individual parts. I recommend to use this mod together with other intended parts:
SGM Supply Lines
SGM Battle Survivors
SGM Warscore

Balancing
-AI naturally splits into multiple fleets, but it does not "understand" the new game rules, therefore it enjoys a 50% reduction of all added penalties.
-With this mod the game is generally more difficult. Plan ahead, otherwise merging your fleets for a prolonged time will ruin you economically.

Compatibility
This mod does not overwrite any core game files and should be compatible with all other mods.