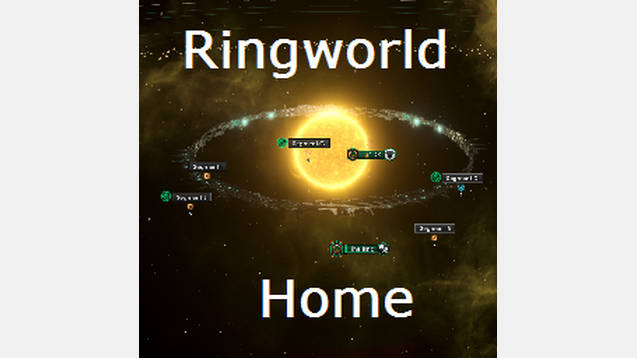 I used, misused, and greatly enjoyed Aru’s Ringworld Start mod, but it seems that wonderful piece of work is now almost six months out of date.

So, one sleepy and cold Saturday evening, I took my limited knowledge of coding and decided to start tearing it apart and updating it, abet with a few custom touches of my own design. Six hours later, this was the result.
It adds four new starting systems to Stellaris, each based around a ring world.

Ringworld is a basic, fallen-empire-type Ringworld, with four habitable segments.

Destroyed Ringworld- Your species is going to be living on the only habitable segment of a ring world that has seen some major damage.

Broken Sanctuary- Your species is one of four placed on a Ringworld to preserve them against some unknown calamity. Now, you find yourself the most advanced of four species in your home system- How will you adapt? (the code procedurally generates each species, so every game will have completely different species on the other segments)

Super Ringworld- You guys finaly wore me down. This Ringworld circling a white star has not one, not three, not four, but TWELVE habitable segments. This is not a reasonable level of power to give to the average player. It will have consequences! (There will also be minor problems with the ring segments not looking too nice at some of the joints, but let’s ignore that.)

This is both my first Stellaris mod, and my first mod uploaded to Steam, so please be constructive with the criticism.

Also, I would like to thank AL|EN for translating this mod to polish for me!