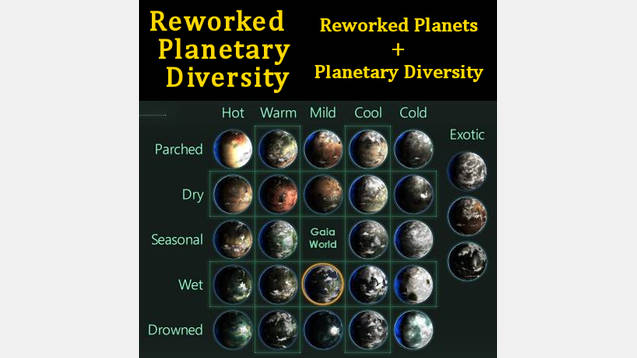 IMPORTANT: Compatibility & File Conflicts
This is my attempt to merge two phenomenal mods, Reworked Planets and Planetary Diversity. The majority of the credit for this mod goes to the creators of those mods, Gatekeeper (PD) and Tommy2Shoes (RP).

Temperature & Humidity
I’ve sorted all 24 of the “standard” terrestrial worlds present in Planetary Diversity onto a climate grid ala Reworked Planets, with 5 grades of temperature and 5 grades of humidity.

Methane, Ammonia, and Tomb Worlds, are not on the grid, but are still playable for roleplay purposes just as they are in Planetary Diversity.

Planet Classes
Planetary Diversity does an amazing job of introducing a suite of worlds that really feel like totally new planet types. But by the same token, these new worlds don’t fit readily into a simple two-axis climate grid.

To ease the integration, I’ve changed the names of some of the new planet classes to try to create a thematically unified whole. Many of the PD planets have long, descriptive name, while the vanilla planet names tend to be short and punchy. I’ve taken the concise and evocative “Cascadian” as my guide when coming up with the new planet type names, and tried to favor climatic features over geographical features to fit a climate model grid. I’ve also tried to maintain the character of the PD planets as much as possible, although one or two worlds have had to change temperature a few degrees to accommodate the grid.

For those names that have changed, the original PD planet name is listed in parentheses after the new name.

Habitability
Like with Reworked Planets, the habitability of a planet is based on its proximity on the grid to a species’ preferred planet type — that is, it’s similarity in temperature and humidity.

I’ve added the ability to “terraform” planets into Tomb Worlds, and to “terraform” a world without changing its planet class (to clear tile blockers), both available with Climate Restoration.

Planet Spawning
I’ve adjusted planet spawn odds to try and match vanilla/Reworked Planet rates. But keep in mind that Methane and Ammonia worlds are not really intended to be balanced with water-based worlds.

Compatibility
This mod will probably experience conflicts or incompatibility with other mods that add or change planets, terraforming, or habitability. It is standalone and should not be run at the same time as either Reworked Planets or Planetary Diversity. For more info on compatibility and conflicts see the Compatibility & File Conflicts thread.

Localisation
Russian – translation by donartemio
Spanish – based on Alguerath’s PD translation, adjusted by me