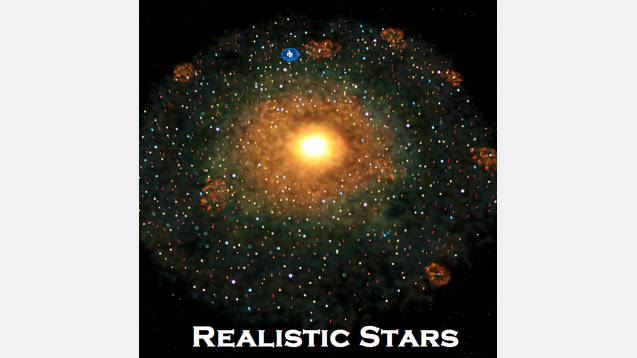 Did you know red dwarves are more than 70% of our galaxy stars?
or that only K, G and F stars have the right qualities for the development of complex life?
don’t you find it weird that all stars have the same size?

This mod aims to improve realism on the galaxies generated by the game, without compromising variety or gameplay.

Features:
The spawn odds of stars are now closer to real life. Red dwarfs are the most common star by far, followed by orange dwarfs, yellow dwarfs and yellow-white dwarfs. A-type and blue giants are very rare.
Star sizes have been changed, red dwarves are the same size as vanilla, all the other stars have been increased in size proportionally to better represent their sizes in real life.
Icons in the galaxy view have been changed to represent the real sizes of the stars.
Empires and Primitives only spawn on K, G and F stars.
Since B-type stars are around as rare as black holes now, this huge stars now yield 5 energy always.
A-type stars are very big and rare as well, so they have an increased chance of generating either 2 or 3 energy.
Red dwarves are now the majority of stars and they have a decreased chance of spawning habitable planets. So the number of habitable planets is narrowly decreased. If you want vanilla numbers of habitable plantes just increase it to 110% before you start.

I’d like to add that I personally think the galaxy view looks much better with the various star sizes and new spawn odds. The rare big stars really jump out.

Uncompatible Mods:
Mods that add new planets or star types.
Mods that change scales and spawn odds of planets or stars.
Mods that change empire initial systems and special systems.
Recommended Mods:
Realistic Star Colors
Current Problems:
Dyson Spheres built around the bigger star types (A and B) are built inside the star. I can’t really test any fix for this since I don’t own Utopia. If anyone who owns the DLC can fix this and test it, please message me or comment below.
Latest Update:
The mod is now compatible with the Adams update (1.6).
Feedback is always welcomed!