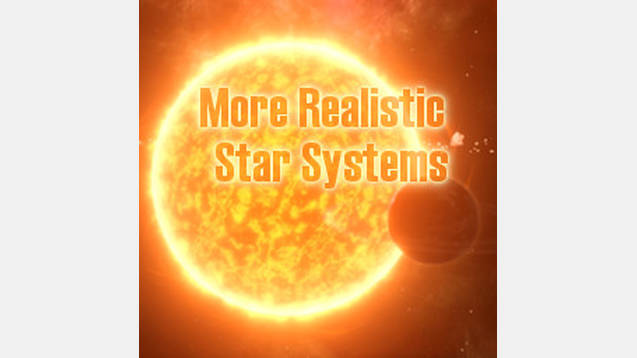 The data I used to create this mod is based off of real data about solar systems we have discovered in the Milky Way. See this video for how black holes compare to other stellar objects. Also, see this page for how different classifications of stars compare to each other. This video shows the relative distances between planets on a scale model in a Nevada desert.

Red Stars
– Smallest of all stars
– Spawns planets rather close to the star that are hot
– Has few gas giants, if any
– Has warm and cool planets farther away from the main star

Orange and Yellow Stars
– Mid Range stars
– Spawns really hot planets slightly close to the star (Think Mercury)
– Has some gas giants, more than red stars
– Has warm planets farther away, and sometimes cool planets
– These systems will be more similar to our own solar system

Special Systems
Gaia Systems
– All planets are gaia planets, and there are a few more asteroids than the average. Very rare
Nuked Systems
– Similar to Gaia system, except all planets are nuked planets. Very rare.
Binary Star Systems
– These systems include another, smaller star orbiting the main star
Supergiant Systems
– These systems contain a star that is bigger than normal, and will sometimes contain an asteroid belt and other planets
Hypergiant Systems
– These red hypergiant systems contain a very large star and sometimes an asteroid belt, but no planets
Supermassive Blackhole
– There will always be one of these in each game. This blackhole is the size of a regular star system.
Our Solar System To Scale
– This system is a To Scale version of our solar system. Since it’s larger than the Stellaris Engine supports, I left it in as an easter egg with a low chance of spawning. -> This is now commented out in the code due to popular request.
————————————

Future Plans
– More special system types (Give me ideas if you have any)
– Brown Dwarf Systems (With a chance of gas giants or cold planets)
– Add anomalies to special star systems (On the back burner for now.)
– Free-floating planets (Primarily gas giants, with a chance for moons)

Please let me know if you find any more issues. Thanks!