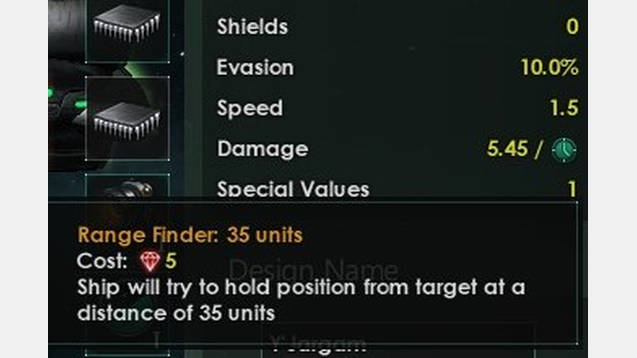 This mod is intended to give more control over the fleets that you build in the game.
After you research the first level of combat computers you will be able to select from the three default engagement patterns available in vanilla (default, agressive and defensive) as well as several new ones which force the ship to keep range at 10 to 120 in 10 unit increments units away from the target.
This allows for precise control over the engagement range of each and every ship in your fleet.
Do you want your battleships to bombard the enemy with torpedoes and tachyon lances from afar? Set their rangefinder to 120 units and they will stay there instead of moving in to knifing range.
Maybe you want your corvettes and destroyers to do the opposite – get in close and personal with the autocannons and small lasers? Set the range from 10 to 30 and watch them close the distance to distract your enemy from the your sniper ships.

The combat computers are modified. They no longer change the engagement behaviour of ships, but still provide the corresponding bonuses to evasion, rate of fire and other stats, like they were designed initially. The AI players still use them and the correct vanilla rangefinder profiles according to their empire aggressive/defensive flags.

This mod changes the ship_size.txt file to add the new module slots to the military ships to allow rangefinder computer modules to be installed. Unfortunately, this means that this mod as of right now is incompatible with any mod that also changes that file.

Changes:
Updated for 1.2.*
Remade all the icons with colors matching UI.
Added new modules to be on par with Asimov updated weapon ranges.
The modules are now in 10 unit increments starting from 10 units. This is for ease of use and readability. If you have weapons with max range 100 – you should use the Rangfinder 100 module. Behind the scenes the module will still keep the ship a little bit closer to ensure being in range to fire.