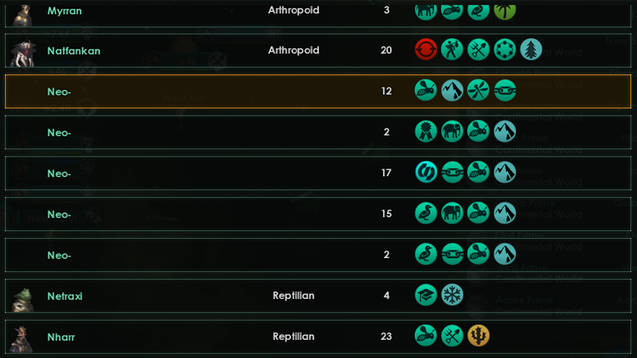 A mod that ensures no automatic gene tailoring from low habitility will occur, preventing subspecies.

This mod is a slight change to the game that removes the chances of an Auto-Gene Tailoring event in the game.

The population event ‘A New Species’ will not fire off in your game for you or AI empires so long as this mod is activated. As a result, no subspecies will be created based on low habitability. This mod was originally created because of the Invisible Population bug, said issue was quashed in version 1.5 of Stellaris.

The mod would now be more valuable to those who prefer for their central species to not gain a subspecies, such as Xenophobe empires. The event line is often less than useful and causes temporary strife that, often enough, leads to just purging or putting them on a planet and giving them independence. Losing this event line is not a big loss and I would encourage those who just don’t want it to happen to use the mod.

What the Mod Does:
– The Mod replaces the pop_events.txt file under the Events folder of Stellaris, with the chances of the event occurring changed from at or below 50% habitability to at or below 10% habitability.
– The change makes the auto-gene tailoring event technically impossible, as the minimum amount for colonizing a planet is a requirement of 40% habitability.

That simple enough change ensures that ‘A New Species’ will never fire.

– This mod replaces the pop_events.txt file in the Events folder of Stellaris in order to modify the requirements for the auto-gene tailoring population event from occurring.
– This mod is NOT Ironman and Achievement compatible, so please use at your own risk if you are playing achievement and Ironman games.
– This mod works with previous save games (I’ve been testing it on my own previous save games) as long as the event has not previously triggered.

Enjoy the mod! If you run into any issues, please feel free to mention them, but I’ve extensively tested this and it should work just fine. Thank you for choosing the No Auto-Gene Tailoring mod!

Check out my other mods in the Serpentis Mods collection link, located just under the Subscribe button!