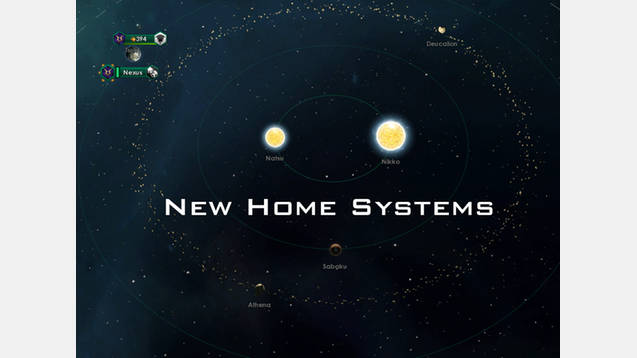 A verity of New Home Systems for your to choose from. This pack is all about adding something unique whilst keeping to a strict code of balance. If you get something nice then there will be something nasty just to balance it out.

Due to the way Syncretic Evolution works it is now only compatible with the Draconis System. I will try and do the others soon if it’s possible.

Draconis System
With a micro black hole at its centre the Draconis System is the kind of Cradle that will give birth to the most unique of Galactic Civilizations.

The Sisters
A Binary System with two Sisters orbiting each other. Another large planet with many blockers that need to be researched to remove.

Chronos System
This pulsar is aligned in such a way that it provides many Galactic Civilizations the ability to accurately track interstellar time. Many have dubbed it after their own old gods of time. A dense asteroid field offers protection to two habitable planets both in geocentric orbit around Chronos. The sister planet may hold a long lost biological ancestors.

Eisley System (Hard)
Escaping a home system gone nova and forced to land on an inhospitable moon around a Gas Giant. Can your survivors rebuild a lost civilization on a moon once used as target practice for some unknown force?

Pheydra System (Hard)
A unique system with three small habitable planets each with a different set of resources.