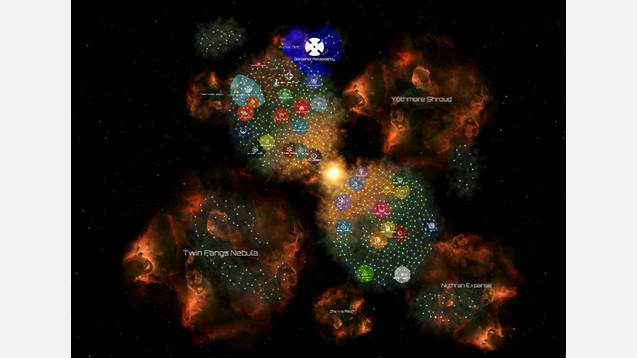 This one will still be the best for performance though.

I always wanted to be able to have more than one galaxy in the game. So I made this using the Stellaris Galaxy Generator by Retalyx.

This is a lite map mod, designed to be played on almost any system without lag.

The map is a static “galaxy”, with two major clusters of stars, each numbering in and around 400-500 stars as well as numerous small galaxies ranging from 12 stars to 80. There exists no hyperlanes between the various galaxies. I’ve designed the mod to have inter-galactic warfare be an end game thing, requiring either the Jump Drive or Psi Jump Drive in order to cross the vast distance between the two galaxies.

In order to set it up how I wanted it to, I had to extend each Jump Drive’s range to a multiplier of 7.0. Obviously this would make it very unbalanced, so I changed both drives to work like warp drives, but with much faster travel (6 times faster than warp 1), and much larger range, but not instantaneous like default jump drives. If you’re using wormhole technology, you’ll probably only want to use jump drives for traveling between galaxies.

Designed to be played with a maximum of 31 empires. I recommend using a mod that adds more pre-ftl species to the game to make the galaxies more emergent, and to use a mod that allows jump drives/psi drives to be researched no matter what FTL you’re using.