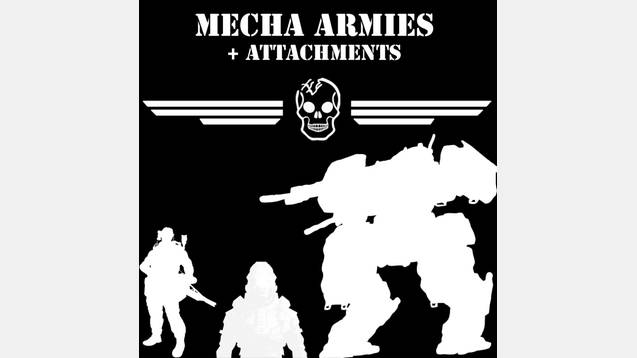 MARINES, TROOPERS AND MECHS!
Are you tired of Xeno scum? Do you long for purity of the galaxy, but you have to outfit your own armies with monsters, mutants and artificial beings? No more! Finally you shall conquer with Marines, Troopers and Mechs!

HOW?
This mod offers you four new armies that will help you cleanse, purge and kill. The mod no longer replaces 00_armies.txt and 00_army_attachments.txt, so all original armies and attachments are preserved so you can roleplay in whatever way you want. The following has been added:

Mercenaries
“Do you see an enemy troop carrier coming and don’t have time to train your own armies? Hire Mercs for quick and dirty jobs!”
Deploy immediately, but demand a lot of payment. Might be best to decommission them after the job.
Colonial Marines
“These people are here to protect you. They’re soldiers.”
Marines outfitted with independently targeting particle beam phalanx. Fry half a city with this puppy. They got tactical smart missiles, phase-plasma pulse rifles, RPGs, they got sonic electronic ball breakers! They got nukes, they got knives and sharp sticks.
Mobile Infantry
“Naked force has resolved more conflicts throughout history than any other factor.”
Troopers outfitted with powered armor suits. Everybody fights, nobody quits. Require Powered Exoskeletons and Combat Training.
Space Marines
“Cleanse, Purge, Kill!”
Supersoldiers outfitted with the best the Mobile Infantry has and then some. Bred to fight. Require Exoskeletons, Combat Training and Gene Seed Purification.
Mechwarriors
“Army purely made of the biggest mechs that can be built.”
These armies are made of the biggest mechs that are technically feasible. More than powersuits, these mechs are titans of war. Require Exoskeletons, Combat Training and Spaceport lvl 6.
ARMY ATTACHMENTS