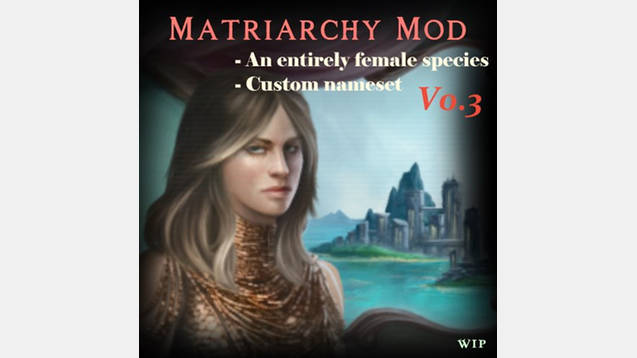 This mod adds a race of humanoid females along with a namelist for your sexy alien space women.

This mod adds a new racial selection for a human race that is made up entirely of women (ie. no male portraits or names). Now you can make a female matriarchy, queendom, or whatever your heart desires.

Where:
They will appear under the “Humanoid” category as a female human with dark hair, she should be located on the right side.

V2
– Updated for 1.03 patch.
– Modified female_portraits.txt to NOT allow ANY male characters. Doesn’t exactly work as intended and is experimental. Please report any bugs with this.
– Added more names to the female name list.

Bugs:
– I don’t actually know how to program one gender in so you still “technically” have “male” leaders (ie. Prince) but they look and have female names. There is hopefully a fix for this, somewhere. THIS SHOULDN’T NATURALLY HAPPEN ANYMORE

To-Do:
– Overhaul the namelist.
– Add a memorable quote to the top of this thread.
– More clothing?