Legacy of the Sun Mod 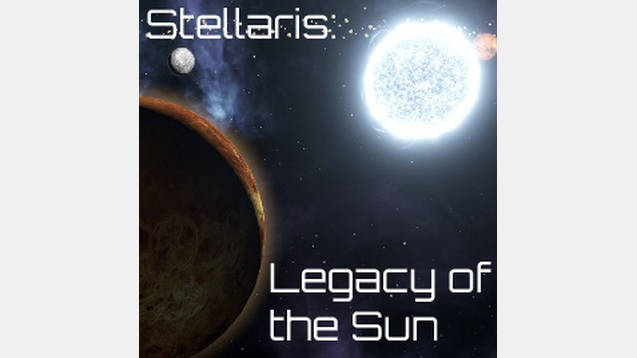 Legacy of the Sun Mod

Warm nights be upon you, Star Travelers. Stellaris is a game that can take place in any given moment. As you know, it’s possible to encounter Earth in 4 different stages, Medieval, WWII, Early Space Age, and Star Nation. This mod aims to add even more ambiguity in when Stellaris takes place. After all, not every star nation will be funded on 2200. So now, it’s possible to run into 4 more types of Solar Systems, each with a very different Earth.

Proto Sol – The Sun in its infancy. Earth is a molten planet with 2 small moons, while Venus is a pristine habitable world. This is an initializer system. This is the most unrecognizable of all the variations. There is no asteroid belt, in its place a single barren planet, while everyone’s favorite dwarf planet lies proudly in the outskirts of the Solar System. There is also a 5th gas giant, while Neptune and Uranus have traded places.

Red Giant Sol – The Sun in its death throws. Mercury, Venus and Earth have been consumed by the expanding Sun. Titan and Europa are continental and ocean worlds, respectively. You will start on Titan.

Martian Sol – Inspired by Mars post-Earth, this is solely an initializer. You will start on the Arid planet of Mars, Earth being a barren world, which can be terraformed later in the game.

Ice Age Sol – The Sun during Earth’s Ice Age. The Earth is an arctic planet.

White Dwarf Sol – Only observable via random encounter, witness the future of our Solar System billions of years from now, a completely lifeless star system with only a small white dwarf where the Sun once stood. Whatever legacy we have, you won’t find it here.

To compliment the new initializer systems, three new custom empires have been created, with unique starting screens and descriptions.

Venusian Enterprises: A Megacorporation that places industry and wealth as a priority above all else, this ruthless capitalist nation will stop at nothing to upsize its profits. Is all of this industrialization healthy for the planet?

Penguin Covenant: A peaceful theocracy, Penguins desire nothing more than to be reunited with their Human saviors who brought them to Titan at the time of the Sun’s expansion. While peaceful and xenophilic, heresy against the Human Saviors is not tolerated.

Martian Directorate: Without a doubt future Keepers of Knowledge, the Martians have a tragic past they hope will never befall another civilization in the galaxy. They have made it their mission to teach all empires the proper and responsible use of technology. This empire is based on a mod called Martian Start by CylonBunny.

The Ancient Mars and Ice Age Earth textures are from Ittiz over on DeviantART, he has some phenomenal space works in his gallery.

Originally you had a 40% of finding a Sol system. Now the chance is increased to 90%, almost guaranteeing you will find a Sol system (as long as you aren’t starting in one.) This does not affect the Commonwealth of Man’s unique encounter with the United Nations.

Future plans:
I’ve been thinking of ways I want to expand this mod, instead of just having it some alternate starts with custom countries. For now, I want to expand on the Penguins, and script some events for them trying to find humanity.