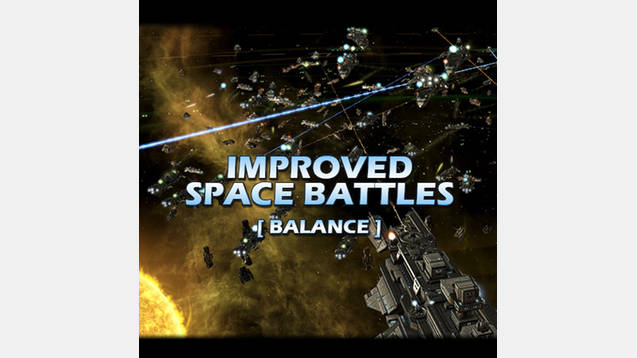 Improved Space Battles – expand your mid / late game with 5 new super-capital class ships, over 50 new technologies and 11 doomsday weapons – including planet destroying, star system destroying and anti-fleet super-weapons.
Compatible with Stellaris 1.6 and 1.7. Let me know if you find any bugs.
Improved Space Battles (ISB) attempts to improve both the visuals and gameplay of Stellaris’s space battles. This is the standalone balance portion of ISB and contains gameplay changes designed to balance and encourage massive space battles. For the best experience, use this mod with Improved Space Battles [Graphics] which focuses on graphical tweaks for more epic space battles. This mod is designed for long games in huge (1000+) star galaxies. However you can lower the mod’s difficulty for smaller galaxies through Empire policies.

Improved Space Battles is a mod that aims to : Speed up the early game. Encourage strategic wars in mid game by allowing players to build defenses that limit an enemy fleet’s ability to just FTL past their entire border. Set up the end game for massive battles with other empires and galactic invaders. It also modifies fleet AI to make large battles less of a melee brawl.

IMPORTANT – You can adjust the difficulty of crises / FEs / AEs / Guardians at any point in the game through empire policies. Type free_policies into the console to freely change policies without a cooldown.

IMPORTANT – Fleet Power calculations halved. This change is intended to avoid value overflow issues making the AI do stupid things. The displayed FP of pretty much everything has been reduced to ~50% of what they were before, but their actual strength is unchanged
General
Buffed Unbidden fleets.
Unbidden now spawns approximately 10 years earlier.
Unbidden still bugs out does not make use of all available constructors.
Unbidden is still balanced as a “starter crisis”.
Greatly buffed Prethoryn Swarm fleets.
Fixed bug with Swarm planet infestation.
The Swarm now receives reinforcements based on number of planets controlled.
You now have approximately 12-20 years to build up a defensive position after the breach points have been identified.
Buffed Fallen Empire fleets with several surprises.
Weapon Changes

It is recommended to start a new game after installing the mod.

Full changes are too long to be posted here, please see the change notes (starting from the bottom 2 posts)