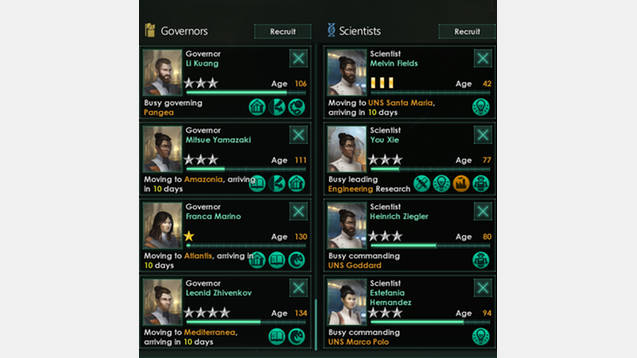 Main features
Increases the probability of gaining a second trait when levelling up.
Makes it possible to gain a third trait at higher levels.
Scientists are more likely to gain a trait relevant to what they are doing at the time (leading research or captaining a science ship).
All leaders gain a small amount of experience every month regardless of what they do.
Scientists gain more experience from leading research and less from surveying the unknown (though they still get more experience when out and about than when in the lab).
Leaders start at level 0, and get no bonuses except those from their starting trait until they level up.
Leaders will level up slightly faster than before.
The various bonuses from skill levels are 33-50% lower.
No meaningful level cap, leaders can progress all the way to level 15 if they gain enough experience.
The leader pool is larger (5 instead of 3) and refreshes faster (every 5 years instead of 10).
Localisation
No localization needed, this mod will work in any language!

Save game compatibility
This mod should be compatible with existing save games, but your leaders will suddenly be less effective until they level up a bit (as level dependent bonuses are reduced). If your leaders were close to levelling up before they might be over the new XP requirement, in which case they will level up at the next monthly tick.

Removing this mod will break any existing save where any leader in any empire is above level 5. Don’t do that!

Compatibility with other mods
This mod modifies the following vanilla files, and should be compatible with any mod that does not modify the same files:

NB: This mod conflicts with Leader Skill Cap Reborn and Researcher Trait ‘Fix’. It does however includes equivalent functionality, so simply disable those mods if you enable this one.