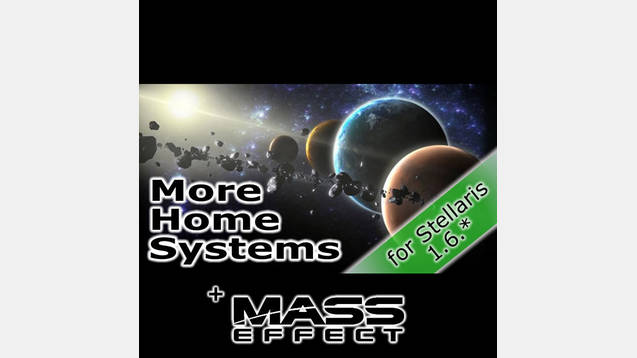 Do you think the randomly generated starting systems lack character? Then this might be the right mod for you!

This mod aims to add more interesting starting systems to use for the player and custom AI empires while keeping everything balanced – for the most part.

This mod adds the following systems:
Qastliani System:
The Qastliani System, once home to an ancient long forgotten civilisation is now again cradle to a young species reaching for the stars.
Homeworld – Size 16-20
1 Sun, 1 Destroyed World, 2 Molten Worlds, 8 Asteroids, 1 Gas Giant and 2 Frozen Worlds
Ikor System:
Ikor – a binary star system – may be scarce in orbital ressources but it is teaming with life. Your civilisation is the first to reach for the stars. How will your presence influence the other species sharing this system with you?
Homeworld – Size 16-20
2 Suns, 2 inhabited Planets, 1 Gas Giant and multiple Moons and Asteroids
Resh´Tar System:
The Resh´Tar system with three habitable planets orbiting their sun on the same orbit though now long abandoned seems to have once been subject of an experiment of stellar scale.
Homeworld – Size 16-20
1 Sun, 2 Habitable Planets, 12 Asteroids
Daedalus System:
The Daedalus System features a very special world. Your Ancestor´s legends tell of a great cataclysm destroying your world and dooming your people to extinction. But then the gods climbed down from the heavens to lead your people to their new home in the sky. Though the gods may be gone but their gift to you remains.
Homeworld – Size 16-20
2 Suns, 2 Molten Worls, 2 Gas Giants, 1 Barren World, 4 Frozen Worlds
Kholdan System:
The Kholdan system is a trinary star system consisting of a small binary star system orbiting a red giant and his planets. Your homeplanet is located inside a massive asteroid belt orbiting the red giant. Its surface is littered with craters from previous impatcs that forced your species to develop subterranean.
Homeworld – Size 16-20
3 Suns, 3 Molten Worlds, 1 Gas Giant, 2 Barren Worlds, 2 Toxic Worlds and various Asteroids
Durin’s Forge System:
The Durin’s Forge system is a trinary star system with a few planets and many asteroids.
Homeworld – Size 16-20
3 Suns, 1 Molten Worlds, 1 Gas Giant, 1 Frozen World, 12 Asteroids
One version with and one without quest.
In the quest you will have to find, resettle, rebuild and protect your ancestor’s homeworld. Good luck.
Re´etii System:
The Re´etii system once center of an ancient empire lies in ruins. Their worlds have been burned and their biggest achievement – a giant ringworld – has been destroyed. Your species was once nothing more than pets in one of their zoos. You were lucky enough to outlive your former masters and now rule over the last habitable parts of your ringworld segment.
Homeworld – Size 25 (most tiles aside from those with your pops are blocked with destroyed infrastructure and slums)
1 Black Hole, 4 Nuked Planets, Destroyed Ringworld
This is a fixed and rebalanced version of the “Children of the Ancients” mod created by Belannear. Unfortunately he seems to have abandoned his great work. After the last Stellaris update it was bugged and I don´t want to let his work go to waste.
Changes from the original version:
added more tile blockers to Homeworld
added custom planetclasses for the ringworld parts used in this starting system to prevent getting an unbalanced amount of engineering research points
Mass Effect Systems:
All home planets are randomly sized 16 – 20 like the others.

A: NO. This planet is necessary to prevent problems with the ascension events of the utopia dlc. If you start on a planet other than the 9 standard planet classes you will end up with a planet preference of an undesirable kind (in this case ringworld preference). The empty planet WAS technically your homeworld, but has already been cleared via event but unfortunately the planet deletion is not instantly and takes a few days. Then everything looks the way it should be ????