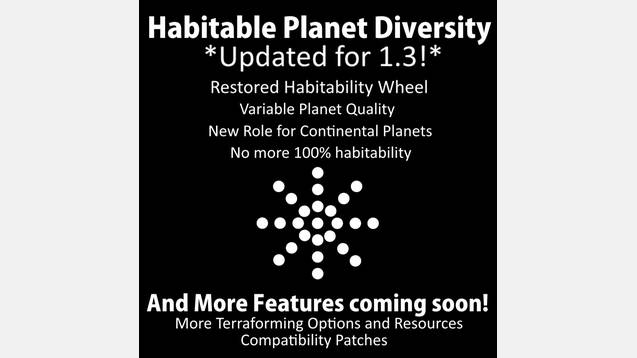 1) Not all habitable planets should be created equal.

2) No planet should be perfectly habitable for everyone.

3) The climate system is dumbed down. The habitability wheel still makes more sense.

2) All planets types except continental (more on that in a moment) now have variable levels of quality. Class I (rare) planets represent planets most like your homeworld. Class II (uncommon) and III (common) planets represent harsher worlds of the same type.

3) Habitability has been slightly adjusted for balance sake.
Continental planets now sit at the center of the habitability wheel, representing a “temperate” planet that all species would find pretty habitable. (You can still choose continental as a starting planet, but class III worlds will be inaccessible to your main species without terraforming or gene modding)

4) System initializers now grant random habitable worlds nearby instead of your species ideal.

2) Building-based terraforming that would allow the slow improvement of a planet even after it has been colonized.

I did my best to create as few conflicts as possible, and to not overwrite anything I didn’t have to. That being said, I did have to overwrite several vanilla files. Other mods that make changes to planets, galaxy generation, terraforming, tile blockers, or empire creation gui will likely create conflicts. There is a possibility of creating compatibility patches for popular mods in the future, so be sure to make a request in the comments if there are any you would like to see ????

-With the 1.3 heinlein update, a lot of previous changes this mod made have become obsolete. See changelog for specifics

-I am currently still playtesting the most recent version of this mod. Please feel free to shout out any bugs or issues you find!

-You are free to use this mod in part or in whole for your own modding, however, you must TELL ME about it and CREDIT me on your mod.

Thanks for subscribing, and enjoy the mod! ????